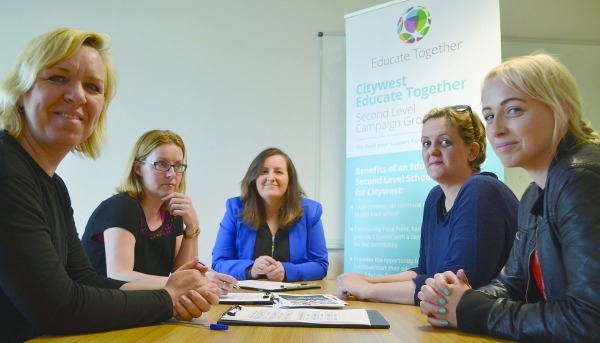 Lack of secondary schools in Citywest gives rise to concern

WITHIN the next three years there will be nearly 1,900 primary school kids attending the four national schools in the Citywest area – but no secondary school.

The schools were introduced into the area due to a population explosion and a growing demand for school places, with the three new schools joining St Mary’s National School in Saggart in catering to the diverse and vibrant population now based in the Citywest and Saggart community.

However, while families welcomed the new national schools they have raised concerns over the absence of a secondary school – with post-primary students currently living in the area forced to leave their community for second-level education.

In three years pupils in Citywest Educate Together and Citywest and Saggart CNS will have reached sixth class and will be ready for post-primary.

Parent and campaign member Leona McMahon told The Echo: “We have 140 letters from the parents and guardians of children in Citywest Educate Together for the Department of Education.

“Secondary level students living in Citywest and Saggart are already going to oversubscribed schools in the wider Tallaght area, with some unable to get a place in a school close to their home and travelling to places like Templeogue.

“The secondary schools in neighbouring Tallaght communities can’t cater for the young people in Citywest as it is, what hope is there going to be by the time we hit 2019?

“We need a secondary school and, alongside providing much-needed school places, it will create a focal point for the community.”

She added: “There is also an autism unit in Citywest Educate Together and these children’s educational needs also need to be recognised at secondary level.”

When contacted by The Echo, the Department of Education and Skills said that a new 1,000-pupil, post-primary school opening in Kingswood this September will “serve the needs” of the Citywest area, alongside a second 1,000 pupil secondary school due to open in the Firhouse/Old Bawn area in 2018.

The Department said that the demographic date for the Tallaght area will be kept under “ongoing review”.