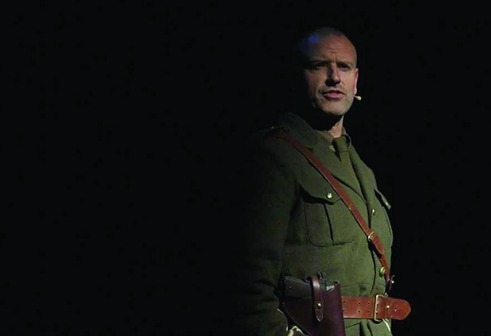 LAOCHRA Gael, a new play by local man Alan O'Neill, will be staged in the Civic Theatre on Sunday, February 7.

The production tells the story of the 1916 Rising and its heroes through song and poetry, with the play asking the audience to become the custodians of 1916 and to pass down to their children and grandchildren the lyrical and musical gifts that are the songs, poems and stories of the people of Ireland, the country’s ‘true history’.

Old Bawn resident and playwright, Alan O’ Neill said: “Those in power wrote the history books while those who suffered wrote the songs and poems.”

According to O’Neill, Laochra Gael is the definitive tale of the rebellion, it’s the people’s story.

Told through music, poetry, story and song, the play lays out the background to the rising, the rebellion and its heroes, those who have been celebrated and forgotten.

On stage, you may see some familiar, local faces, with the majority of the cast hailing from the Tallaght area.

The playwright, Alan O’Neill was born and bred in Tallaght, playing for St Annes GAA club in Bohernabreena, with the play directed by Old Bawn native Michael Anthony Byrne, a former star of Mrs Brown’s Boys and Red Rock who earlier this year opened a children’s theatre workshop called Kidz in Theatre.

Kevin Shortall from Kilnamanagh plays the part of the Poet and has studied and taught history, literature and drama for over 20 years.

Barra De Roiste from Balrothery plays his lifelong hero and role model Pádraig Pearse while Aisling MacDonagh who teaches in St Aidan’s school in Brookfield plays the role of the female storyteller and Grace Gifford, the wife of Joseph Plunkett.

Last but not least, Balrothery tenor and veteran of the showband era Shay Roche plays the part of the tenor.

The story is brought to life by music guided by musical director and All Ireland Champion Mandolin player Patrick Mangan, with the music performed by Irish history band The Druids, the world famous Uileann Piper Tommy Keane and Dublin tenor Shay ‘The Count’ Roche.

This promises to be an entertaining, informative and unique production which will captivate the audience and bring them on a journey narrated by Noel Shannon and Melissa Cooney.

The show starts at 8pm and tickets are €15. For booking information, please contact the Civic Theatre on 4627477.