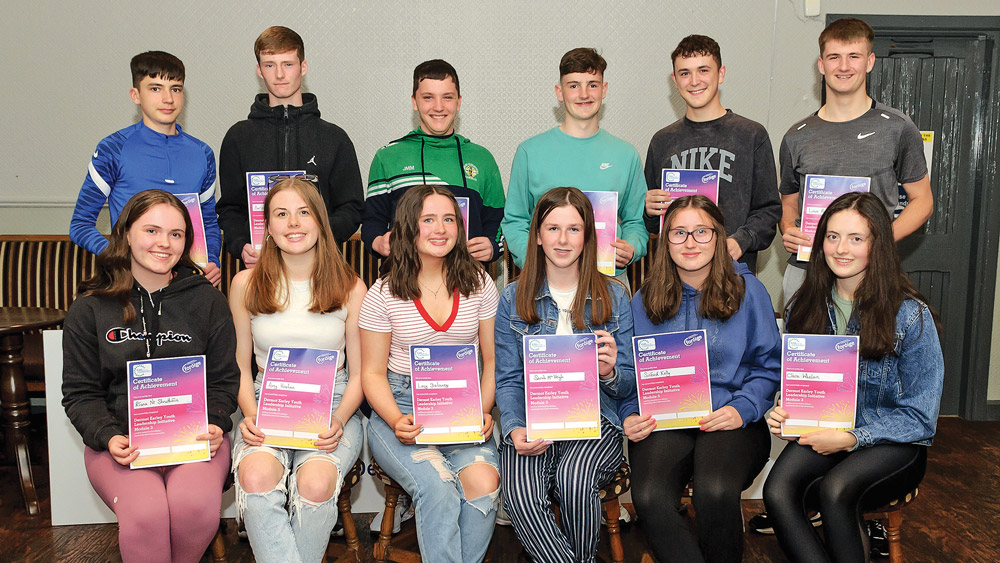 Leadership qualifications for Round Tower group

In Round Tower GAA Club, 18 young people who play gaelic games across all four codes with the club and are dedicated volunteers have formalised all of their experience with a qualification.

“This is our first year running the Dermot Earley Youth Leadership Initiative here in Towers,” says Sharon Jordan, who is assistant secretary in Round Tower GAA and helped roll out the initiative in the club.

“Six of us signed up as tutors to facilitate the three modules and we’ve had 18 young people come through it with qualifications successfully.

“The caveat was that this would be for things that you don’t necessarily learn in the classroom.

“So that would be things like practical skills, critical thinking, decision-making and other leadership skills.

“It’s been phenomenal to see how all the young people have developed. They have all really come out of themselves and found a place.

“To get a qualification at this stage, at 16- and 17-years-old after spending their Friday nights working on this, it’s amazing, for their CV, for their confidence.”

The DEYLI has seen over 500 young members of the GAA complete the programme to gain a Level Six QQI qualification in Youth Leadership and Community Action since its establishment in 2014.

Run by Foròige and the GAA, the DEYLI was established in recognition of the late great gaelic footballer Dermot Earley, who won five Connacht titles, a national league title and two All Stars with Roscommon.

Dermot was a high-ranking military official in Ireland and with the United Nations, and continues to be recognised as one of the most inspirational community leaders.

Each of the young people completed the 50-hour course after starting in November last year and were presented with their certificates on Friday night on Monastery Road.

Twenty hours of the course were dedicated to the young people researching, planning, and delivering a community action project.

The Clondalkin clubmates did this through things like a Ukrainian culture night, community clean-ups, starting a TikTok for Round Tower, and an awareness session for girls dropping out of sport among other things.

“I heard about the Dermot Earley Youth Leadership Initiative through the GAA and knew the history of Dermot Earley, with his background in the army and the principles that he lived by,” Sharon expands.

“It’s a ready-made programme as well, with the tutor’s handbooks and the students’ workbooks ready to go. It has a great calibre.

“It really helps formalise the skills that the young people have already been developing on the pitch as players, coaches and referees, and learning from older players or mentors.”

And this appears to only be the beginning for the DEYLI in Round Tower, with Sharon excited to deliver it to a new cohort of young people.

“I am so excited to roll this over and go again,” she says.

“All the tutors are obviously volunteering their time, so our first step would be to recruit a few more tutors and then start looking at our young people. It’s a big commitment, but it’s very worthwhile.

“We really want this to bed into the club because it is such a great fit.

“I’ve heard chatter from people that may not have known I was involved and a few already expressing an interest in taking up the course already – there’s been a huge ripple-effect through the club.”