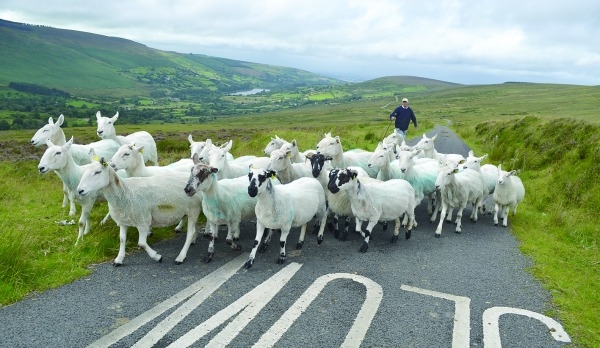 LIFE on the Featherbeds is set to continue as it has for centuries, after it was announced this week that the 4,900 acres of Dublin Uplands would be retained in public ownership.

In recent weeks, the Government came under mounting pressure to buy the land bank which, stretching from Kippure down to the Glenasmole Valley and into the Bohernabreena Reservoir, was being sold by Nama for an asking price of €2.6 million.

Concerns were raised over the land being sold to a private party which, many believed, may have seen part of the land developed or the introduction of wind turbines.

However, less than one week after the Green Party presented a petition to Government signed by 20,000 people, all calling for the lands to be retained in public ownership, the Department of Arts, Heritage and Gaeltacht reached an agreement to buy the 4,900 acres of mountainous land.

The land will now be added to the Wicklow Mountains National Park, expanding the total size of the national park to 22,000 hectares – making it one of the biggest national parks in Europe.

Announcing the acquisition on Wednesday, August 3, the Minister of State for Regional Economic Development, Micheal Ring TD, said: “I am very pleased to announce the expansion of the Wicklow Mountains National Park. The Featherbeds are an important area for nature conservation and for public amenity.

“I believe an exceptional opportunity has been realised for the State in terms of the environmental gain and the amenity potential.”

“Retaining this land is a significant national as well as local development, which has widespread public support.

“This was a once-in-a-lifetime chance to protect a large area of the Dublin Mountains for the hundreds of thousands of walkers and nature lovers who value the uplands as one of the great things about our capital city, and we’re glad that sense has prevailed.

“Nothing will change immediately with respect to the site, in terms of land access etc., but we now have certainty, and a real opportunity to develop this area into one of the finest attractions in the country.”

He added: “This was people power in action – this deal wasn’t just going to happen by itself. It is a very good result for the country.”

The lands being sold by Nama have for centuries being used by local farmers for commonage grazing and this week Glenasmole farmer Donie Anderson branded the decision a “positive move” for local life, nature, farming and recreation.

He said: “A lot of local farmers have grazing rights on these lands which are enshrined in the Constitution, and we can also cut turf from certain parts of the land.

“We farm that land like we own it, even though we don’t, and the reason the land looks the way it does is because it has been managed by local farmers for years – with the National Parks overseeing the land.

“There was a lot of concerns by local people and recreational users over what could potentially happen if the land was sold to a private developer.

“However, to hear the news that the State will buy the land is a very positive move for all aspects of the local community and further afield.”

The National Parks and Wildlife Service of the Department will work with the Dublin Mountains Partnership to manage the land – who together, according to the Minister, will work to “improve the recreational potential of this area while ensuring the highest standards of nature conservation”.