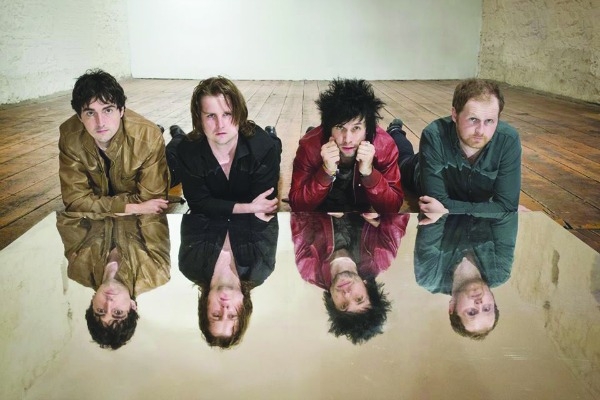 AFTER a bit of a hiatus, Bipolar Empire are back on track and are releasing their second album , Who Cares?

It’s been five years since the lads unleashed their distinctive, upbeat strain of rock and roll with their first album, Feel That You Own It – and now, after some time apart, they’ve regrouped to release their second album, Who Cares?

Sitting on this album since 2013, the melodic foursome believe that now is the right time for its release, with Who Cares? available to download from all major sites, including iTunes and Spotify, now.

While no promotional gigs have yet been announced, the lads have stayed true to their roots and have committed to play community celebration Tallafest this September 10 in Tallaght Village.

Ahead of the album release date, lead singer Shane O’ Reilly took five to speak with The Echo.

Is the band back together?

Well to be honest we’ve never actually broke up as such. We were on a bit of a hiatus. Since the band began back in 2008 we’d be on a bit of a merry go round. I think we just needed to take a step back and regenerate.

Bipolar Empire took a break for a while there, what have members been up to?

Yeah we’ve been all doing different things. I moved to London two years ago, have been seeing somewhere new and doing a few different jobs outside of music but writing a lot of solo material as well. Joe and Mark formed the Classic Beach Boys with a few of our friends and they’ve been doing great. Callum has been doing some session work with a few Irish acts.

Why release an album now?

We just feel it’s the right time. We’re very happy with what we’ve done on this album and are ready to let go of it in a way. We really put everything into it and because of that we were very precious about it and wanted to wait for the right deal to come along. However, these days we realised you don’t really need a label anymore as such so we’re releasing it independently. There’s so many albums on shelves in labels belonging to bands and we don’t have that problem… we can just get it out into the world and still have the same level of quality in the recordings.

When was the album written?

It was written mostly in 2012 and recorded in 2013 over a 12 week period travelling back and forth to Metropolis studios in London. There’s never going to be a perfect time to do it. It’s a matter of getting your art out there. I think in a lot of ways music these days is very predictable, a lot of the music that gets onto the main radio stations and promoted everywhere comes with a bag of tricks attached. Our music is completely ours and not manipulated to sell. It’s been written in the oldest form of what music is meant for and that’s happiness and entertainment. We could’ve easily never released this album.

Tell us a little about the album?

Well it’s quite diverse, it has some rock songs like In The City and I Wanna be Famous as well as some more acoustic songs such as I Heard You Got Your Wings and Gina. We’ve always been a big fan of vocal harmonies so you may hear a bit of Beatles and Beach Boys influence on one or two tracks also.

Are there any surprises in there?

I think there’s one or two surprises in terms of songs that didn’t quite make the first album but squeezed onto this one. I couldn’t say one thing in particular. We just wanted to produce some music we’d be proud of for the rest of our lives.

What inspires your music?

In my writing I’m not very pre-meditated so I find myself writing about a lot of different subjects. Love is a big inspiration and fun has always been a thing to be reminded about. We’re not always so serious though, we’ve one or two light hearted jokish songs also.

Has the band’s sound changed since forming?

It’s changed a lot. We’ve discovered so much great music since the early days like Van Morrison and even Frank Zappa. They’ve rubbed off us in some way I’m sure. We would always go and find some new album and get excited about it and then you’d find yourself playing a new song in the jamming room with a funk riff or a slap bass line.

Is there any promotional gigs in store?

Not as of yet although we’ve confirmed we’re going to play at Tallafest this year, it’ll be our first gig back so that’ll be interesting!

How are you all feeling about the album release date this Friday, August 5? How can people get their hands on a copy?

Initially we’ve decided to release it online only. It’s been a few years for us and we’ve had our attention on other things really. We’re hoping if the album is well received to have albums to buy from either our website or at live gigs if we decide to play some.

If the band could play with any other act or musician who do you think it would be and why?

I’d say Paul McCartney would be pretty amazing. Jam out a few Beatles songs singing a few backing harmonies together. Callum on the cajon. I’d say it’d be the best craic, we’ve always had sing-alongs at parties it’s what we’ve always been about.

If there was one record which influenced the members of Bipolar Empire or its sound the most, what would it be and why?

As I said we’re quite diverse so it’s hard to pick one but maybe something like Moondance by Van Morrison. It’s got ups and downs and is very song based, although there isn’t much brass on our album.

Who Cares is out now. For further details visit the Bipolar Empire Facebook page.