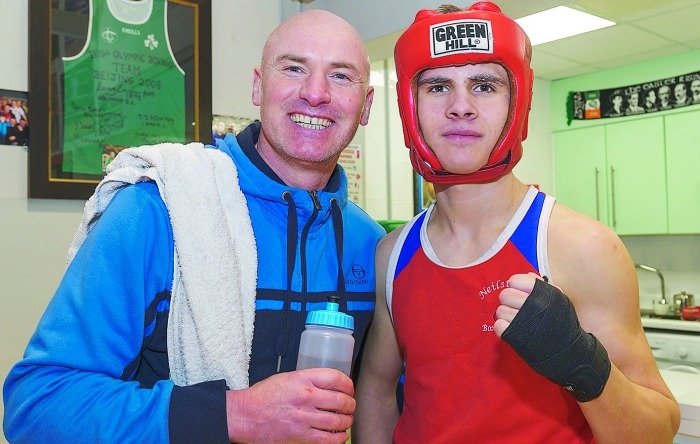 QUITE a number of local boxers made it out successfully from the preliminary rounds of the National Senior Boxing Championships in the National Stadium last weekend.

John Maughan of St Mary’s took a unanimous decision in his 69kg clash with Foad Baghban of Dunboyne to set up a quarter meeting with Geesala’s Darren Timlin tonight (Friday).

His clubmate Michael Frayne will also be in quarter final action that same night after his first round stoppage of Graham O’Shea, of Corpus Christi BC, propelled him through to a clash with Letterkenny’s John McDonagh at light heavyweight.

It was a productive day for Crumlin Boxing club who saw four fighters safely through their respective preliminaries.

While Jade Gibbons received a walkover through to the Women’s 64kg semi-final where she will come up against Ciara Ginty of Geesale on Saturday, 75kg Men’s competitor, Tony McGlynn emerged on the right side of split decision against Ballincarrow’s Jason Clancy, subsequently earning a quarter-final meeting with Twin Towns’ Paul Kelly on Friday.

Also competing at 75kg, Crumlin’s Peter Carr emerged a 3-0 winner over another of the Ballinacarrow contingent Barry Kennedy to secure his place in the last eight where he will take on Kelyn Cassidy of Saviours Crystal.

At light heavyweight David McDonnell also recorded a unanimous decision after his bout with Johnstown’s Pierce Sherry and will now take on Karol Delugosz of Scorpion BC on Friday.

Their Crumlin clubmate Eoin Duffy was unlucky not to progress to the last eight after he was edged out on a split decision by welterweight opponent Owen Bergin of Portlaoise on Saturday.

It was a disappointing result after he had beaten Dylan Philips of Glasnevin 3-0 in the preliminaries the day before.
There was no joy either for Palmers-town’s Sean Hunt who came undone on the same score-line in his 69kg bout with Conor Ivors of Thurles.

Peter Fabian of St Mary’s saw his campaign in the

same weight division ended with a loss to Kilcullen’s Dan Houilhan, while there was also an early exit for Kilnamanagh middleweight Michael McDonagh after he was beaten 2-1 by Chris McClean of Two Castles.

McDonagh’s clubmate Senan Dwyer was despatched from the championships on the same scoreline by Houilhan while another of the Crumlin crop Aidan Metcalfe was stopped in the third round of his 64kg clash with Sligo City’s Thomas Myers.

Drimnagh Boxing Club will have some interest in Saturday’s championship semi finals as Patryk Adamus goes up against Tommy Casey of St Francis for a place in the 56kg decider while Kilnamanagh’s Dean MCormack takes on Blesssington’s Jason Smith in the last four of the 52kg division.

In the heavyweight semi-finals Crumlin’s Patrick Reilly meets Cormac Long of Rathkeale while clubmate Mick McKeever throws down the gauntlet to Ballinacarrow’s Eamon Tighe in the super heavy penultimate rounds.