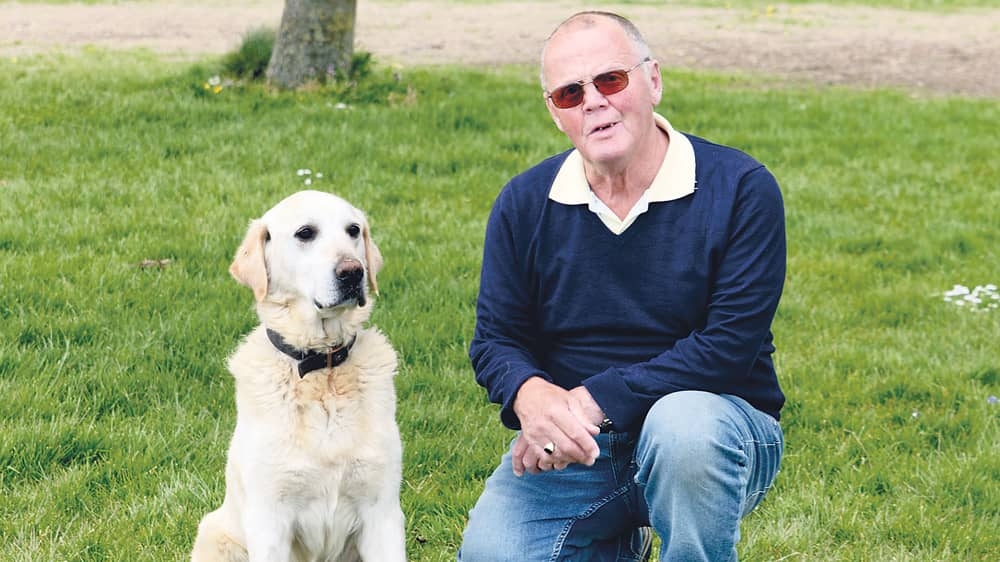 “I couldn’t find my real mother, looking for her was like going down a dark tunnel,” says Andy Hughes, who was born in the St Patrick’s Mother and Baby Home on the Navan Road.

“I know she was from Scotland and that she gave birth to me when she was only 17,” the 68-year-old laments.

Andy Hughes has become very well known around the area for his friendly “hello”, but it’s the dog, Junior, that steals the show

“She was put into the mother and baby home on the Navan Road.

“She was moved around a bit to do labour and work in the laundries or whatever and from what I was told, from the little information I was given, she didn’t have an easy life.”

When Andy tried to trace his lineage, his efforts lead up blind alleys with nuns telling him “they lost contact” with his mother years ago.

Andy was then adopted by James and Annie Hughes and he grew up in St Maelruan’s Park just off the Old Bawn Road.

Despite a difficult start to life, Andy had the ability to find joy in each aspect of his life and he squoze the most from every moment.

Growing up around Tallaght in the late 1950s and early 60s was full of antics with his best pal Kevin McGrath, with the two of them spending much of their time playing football.

“We’d be in Goose Park down the road and it had this water fountain. So we’d come up after playing football and go fill up our water bottles, I remember it very clearly.

“It was obviously very different then. My uncle JJ reared pigs, just at the cottages there on the Old Bawn Road.

“He’d go around collecting slops from around Maelruans to feed them.”

Despite their being a prohibition on “foreign games” by the GAA, Andy had no problem playing soccer with his beloved Newtown Rangers FC and St Dominic’s GAA Club.

The grandfather of three wastes no time in mentioning how, with Dominic’s, they “were the first South Dublin side to win the Under 13 South City League” in 1963.

As he got into his late teens, Andy was playing underage Gaelic football with Dominics on a Saturday and Junior football with Thomas Davis on a Sunday – ultimately St Dominics became the juvenille section of the Kiltipper club.

For years, Andy played junior football with Davis’s reaching senior ranks at the same time he was at the peak of his abilities with Newtown Rangers.

One night in 1972, when at a barn dance, Andy spotted a beautiful woman across the floor.

A native of Crumlin, Ann McEvoy clicked immediately with Andy.

“We were at a barn dance in Bohernabreena, they used to hold them in St Anne’s GAA Club or a place called Bagnel’s Field.

Admitting, Andy continued: “Ahh look, I fancied her and I invited her for a dance.

“Then we said we’d meet again and we ended up going out with each other for four years.

“Then I proposed to her in 1974 and we started saving like mad.”

The young couple wed in March 1976 and by October the same year, they followed Newtown Rangers alumni Paul and Collette Juke into the brand new Ambervale estate just off the Cookstown Road.

“She’s my rock,” says Andy to The Echo over the phone, after his wife of now 45-years, Ann, leaves the room.

“No really she is just my rock, I’d be lost without her.

“We do everything together.

“Trusting each other is everything, it’s the way we were brought up I suppose.”

Despite any ups and downs, changes of scenery and massive life-altering events such as the birth of sons James and Christopher, Andy’s love of sports never dwindled and it followed him out to Springfield.

“I played a bit of junior and intermediate football with St Mark’s GAA Club and a bit of soccer with the Over 35s in Marks Celtic,” he says.

“I stopped when I was 50, you just know when it’s the right time, maybe you can’t do as much as you used to.

“Once I was finished playing, that was it, I couldn’t bring myself to stand on the sideline and not want to get on to the pitch.”

Even as he was playing football across two different sports, he could not be kept away from it and took up managing his two sons with Newtown Rangers co-manager Derek Mulligan.

Today, the retired toolmaker can be spotted along his route through Springfield with his trusty sidekick, Junior, the beautiful golden retriever, who is “77 in dog years”.

And he has become very well known around the communities generations of residents for the friendly “hello” and wave he offers to each passing person on his thrice daily walk.

But it’s the dog, Junior, that steals the show.

“I do three walks a day, you’re keeping me from going on one now,” Andy says chuckling.

“Junior is like a child, but Sparky [Andy’s previous dog] was the same, he trained him well.

“He’s lying here beside me listening to everything.

“There’s a bunch of kids in Lanndale Lawns that know me and know Junior, they love to give him a rub and sure he loves it as well.

“But I have to say, this dog is absolutely destroyed. He gets the absolute best of everything. He loves his life.

“People like to slag me saying I’m like the Lord Mayor because I say hello to everyone and know everyone,” Andy adds, reflecting on where his friendliness comes from.

“But I just have that happy-go-lucky thing, even my mother would always say I was a very happy child.”