DOGS were never a big thing in Laura Murphy’s life growing up. Yet, she still managed to become a fantastic volunteer puppy raiser for Irish Guide Dogs for the Blind.

“I never ever had dogs. I really had no interest in them, if I’m being honest,” the Templeogue resident tells The Echo.

“My youngest daughter developed this debilitating fear of dogs, and when we were out at the beach, in the park, out and about, she would be so worried and preoccupied about where there was a dog, if they were on the lead or off the lead.

“I just said to Stephen that I’d love to get a lend of a puppy to show her, then I heard the ad on the radio looking for puppy raisers – and that was it.

“We got our first pup about six weeks later. There was a bit of crawling around the back of couches and hiding under tables for about three-months.

“She loves dogs now. It’s funny, this week I had Wren staying overnight with me in my sister’s house as I was minding her kids, and my daughter was texting me asking ‘can you bring Wren home’.”

Irish Guide Dogs for the Blind (IGDB) breed dogs and at eight-weeks-old they are taken on by puppy raisers like Laura.

Puppy raisers are essentially foster parents for each dog. For Wren, she has found a foster family with Laura, her husband Stephen, and their four children.

Laura has raised five dogs over the last seven-years and is currently raising Wren, who is seven-months. 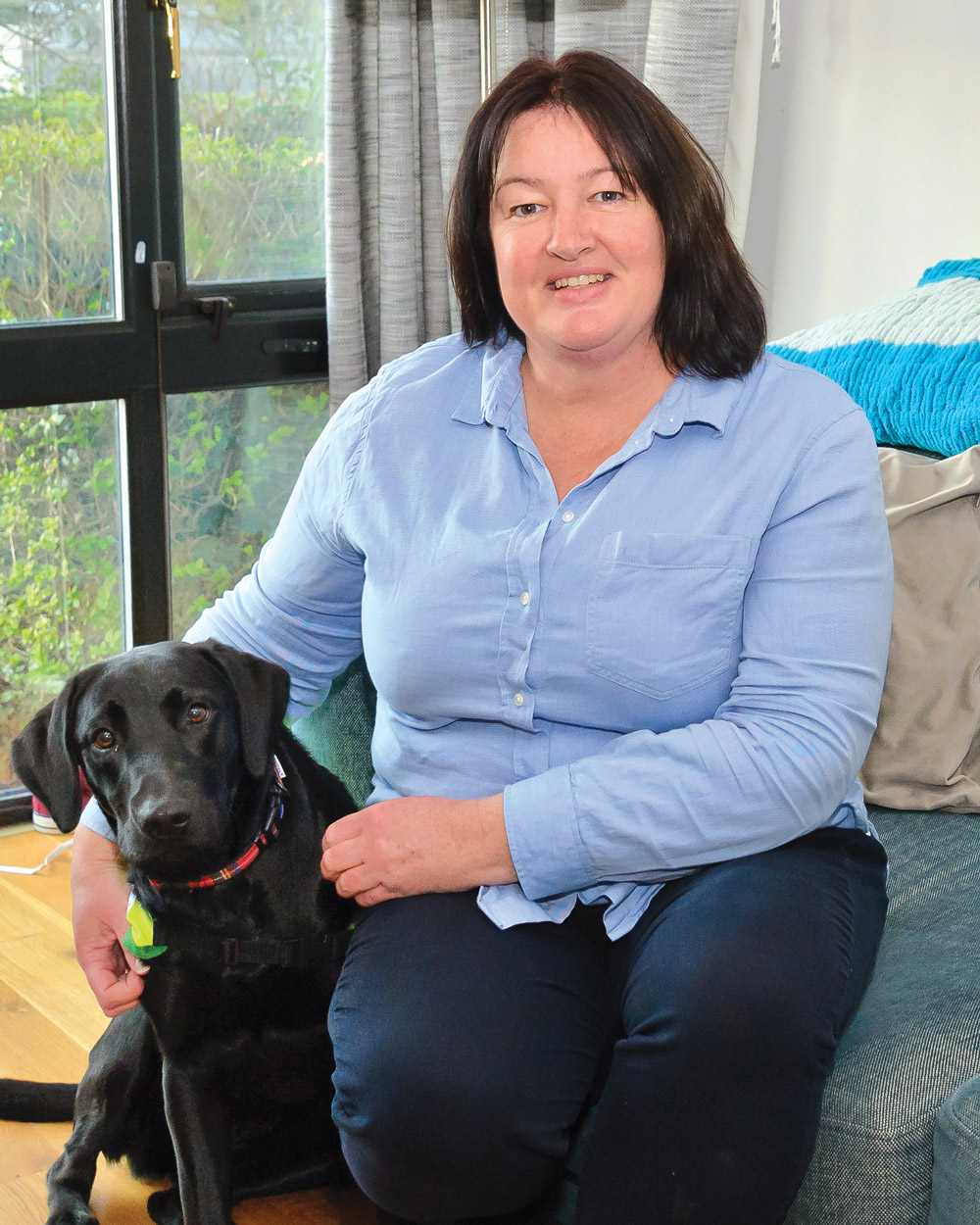 Each litter of pups is named after letters in the alphabet. Wren is part of the W litter.

When a pup arrives, they come with a “puppy pack” for the raiser which contains information such as it’s medical history, guidelines, and a checklist of targets to see them through to a year.

Training at home and online is provided for puppy raisers to help expand their knowledge and assist them in dog handling.

A supervisor works closely with each puppy raiser for support and to monitor the progress of each dog.

IGDB will provide puppy raisers with a crate, leads and other equipment, and cover veterinary fees and feeding costs.

Each puppy raiser plays a crucial role in the development of the puppy, helping them become well-mannered and sociable through teaching them basic rules and obedience.

At the moment, Wren is going through adolescence.

“Exactly like a teenager, dogs go through adolescence and start testing their boundaries,” Laura says with a laugh.

“Wren is a cheeky, stubborn, confident dog. Awh, I had one of those weeks with her last week when she just wasn’t doing anything she was told.

“I was in Marks & Spencer, and she has access rights, so I had her with me.

“I stopped to look at something and straightaway she’s under the clothes, starting to mess with them.

“Then we go to leave and she jumps up on the counter. I couldn’t get out of the place fast enough. 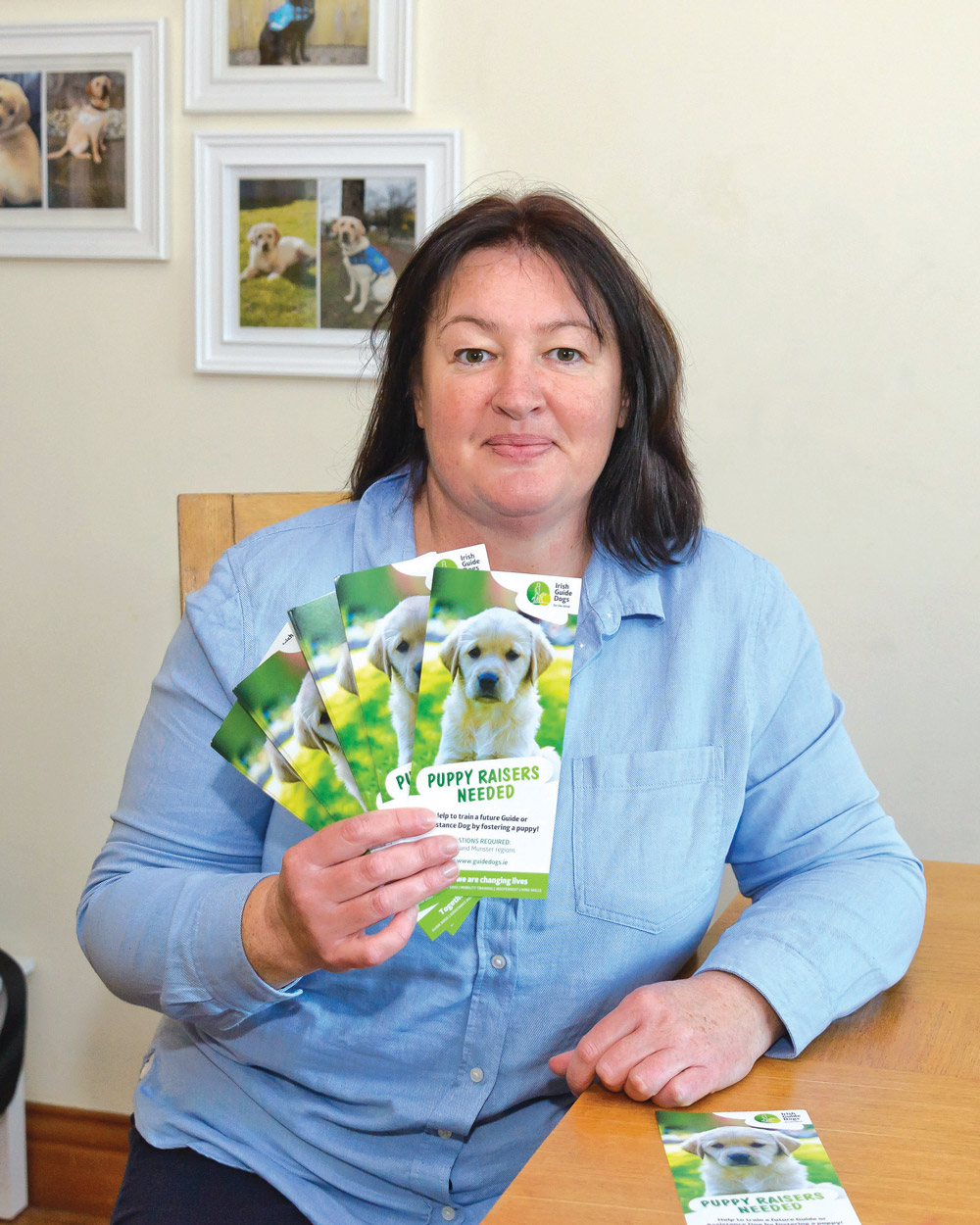 Laura says it’s the most rewarding thing, you get a cute little puppy to play with and train, and you have minders on hand in case you’re going away

“I bring her everywhere with me. They know her here in my local SuperValu. She has started putting her head in people’s baskets now – I do be thinking ‘get me out of here!’.

“But that’s okay. When you have weeks like that, you can go to your supervisor for advice and they are absolutely brilliant.”

When Wren turns one, she will go off to puppy college at the National Training Centre in Cork, where she will work with highly skilled trainers and work hard towards graduating as a guide or assistance dog.

Even after raising five dogs– Ussher, Dora, Ugo, Nina, Indie – the process never gets any easier for Laura and the family when they go off to the academy.

“You know she’s not yours, but you still get attached, you still love sitting down with her in the evenings to have a cuddle, and playing,” the Drimnagh native says.

“You know that they’re going to go on and change lives.

“What we’re doing is setting up the puppy for coping in their working lives.

“Everything that we expose Wren to is done in a really calm, positive and comfortable way because the more positive associations she has now, the more she will be able to cope with whatever comes her way when she’s working.”

At present, there is two pups from the E litter needing puppy raisers, along with three from the G litter and eight from the H litter requiring a foster family from the end of November.

In January, there will be 21 pups expected to be placed with puppy raisers.

So, the IGDB are in need for new puppy raisers to get involved.

What are the requirements for getting involved? Well, we’re glad you asked. 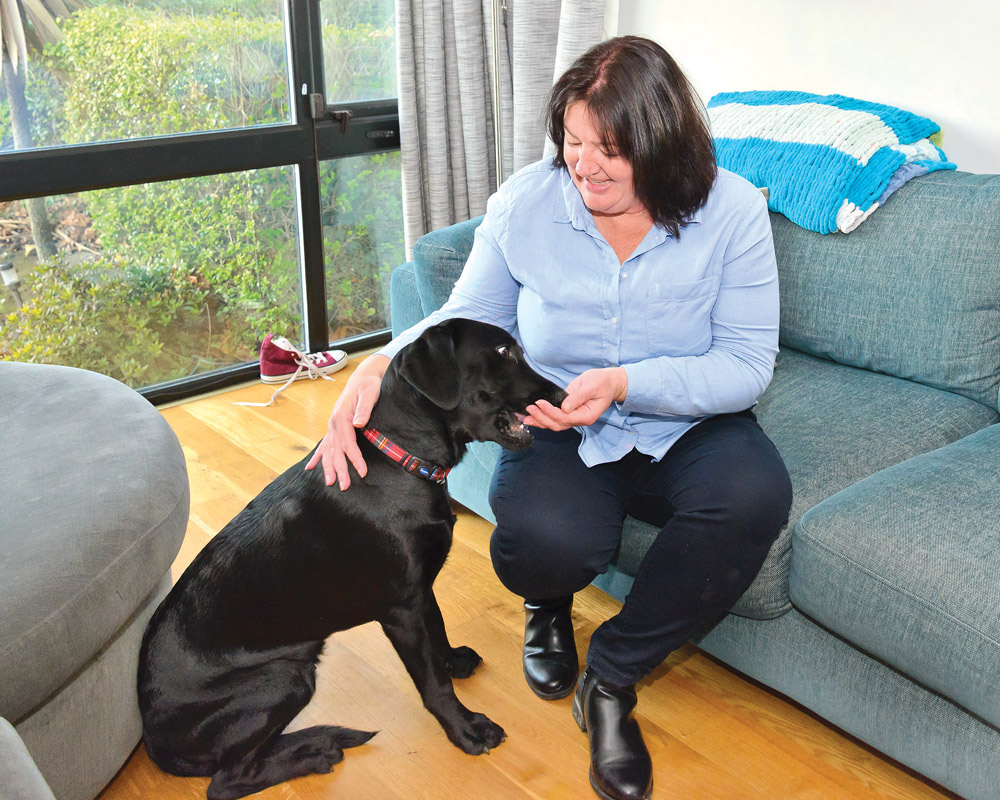 Up to two dogs in the home is fine as long as they are sociable and neutered.

Pups cannot be left along for more than four hours, as they wouldn’t ever be alone in their working lives as either guide dogs or assistance dogs.

Access to a secured outdoor area is a must and children in the home need to be over five-years-old.

“You get the best of both worlds. You get a cute little puppy to play with and train, and you have minders on hand in case you’re going away.

“We actually brought some away on holiday with us – but you don’t need to worry about it if you’re not bringing them.

“Then you get to see them going off to college and get updates from the trainers in Cork about how they’re getting on.

“You get the ‘we’ve got a match’ update then and you know they’re going to make a big difference in somebodies’ life.

“Nina, who we brought to Donegal, on all of the tours and everything, became a guide dog for a young lad in Tallaght.

“He’s going to UCD and Nina helps him get there on the bus and everything. When you hear those stories, it makes it all so worthwhile. You just fall in love with the dogs.”

IGDB is hosting online webinars for those interested in puppy raising on November 23, December 1, 8 and 15 at 7pm.

Further to this, visit guidedogs for more information.