Ryan Tubridy with some of tonight's stars (Photos: Andres Poveda)

THE big night has finally arrived, with this year’s theme set to follow the yellow brick road.

With only hours to go until this year’s Late Late Toy Show, the theme has been revealed as The Wizard of Oz.

More than 200 young performers and talented toy testers will take us over the rainbow tonight, with children from local communities also participating.

This is Ryan Tubridy’s 14th year at the helm of the Toy Show.

Revealing the theme this morning, Ryan said: “I can’t remember the last time I was this excited for the Toy Show given the previews I have had of it this week.

“It is the thing that is close to the hearts of everyone who will be watching. 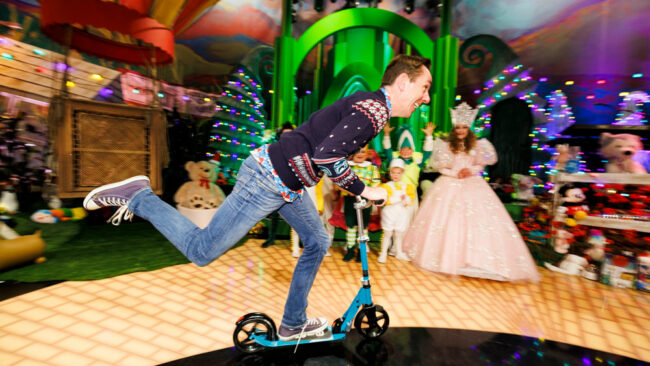 Ryan is in flying form ahead of this year’s show

“Every age group, every generation, people will know from every walk of life where exactly we are going when we see the set up on Friday night.”

He added: “I promised we will be going home.

“Now it is time to simply get the treats in, to get the crisps in and the spirit back in the house and prepare yourself for what I hope will be the greatest night of the year for boys and girls all over the country.