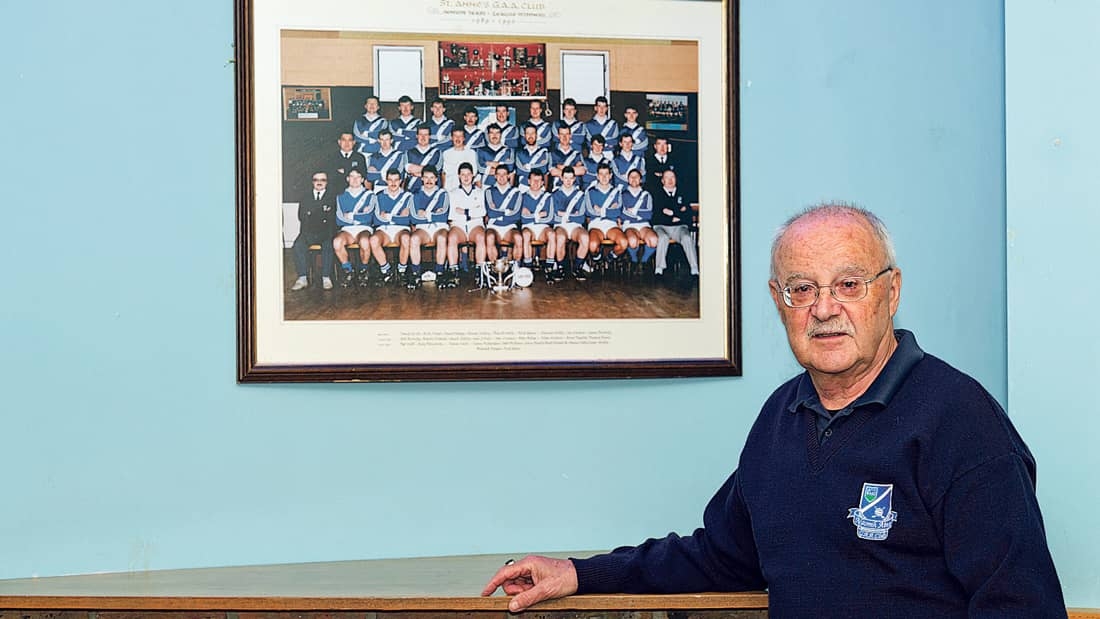 Pat West could be called the bird who didn’t fly the nest. But he loves where he comes from and wholly identifies with the community of St Anne’s parish in Bohernabreena, so why go anywhere else?

Born in 1948, Pat was birthed into a world that had St Anne’s GAA Club at its heart.

72 years on, Pat sits on the very land that he was born into and raised on in Bohernabreena, to reminisce on his days helping the community.

From talking to Pat, there are two things that stand out about what he loves; volunteerism and family.

“I was in the club yesterday getting photos taken and when you walk through, there are these massive framed photographs of each chairman of St Anne’s GAA Club.

“From the first ever chairman, my father, all the way up to the current chairman Tony Hayes.

“Every time I go into the club, I look up at the big frame and think that there was nothing here apart from a pitch, they had to start with nothing and now here we are.”

Pat served as secretary of St Anne’s GAA Club for 44 years between 1969 and 2012, when he retired from his duties.

But St Anne’s goes much deeper for Pat than just being a social outlet or something to do in his spare time – it’s part of his DNA.

“St Anne’s was part of the family,” he says over the phone to The Echo.

“I have been involved with St Anne’s since I was a child, my father Albert was one of the founder members and the first chairman when the club was established in 1937.

“Football was always the sport, the GAA is just the thing up around here [Bohernabreena].

“The youngest age group when I started would have been under-16s. So when I was 8, I was up training with those lads.

“There were no underage teams at that time. I also wore glasses and if you knew anything about the game in those days – it was real rough and tumble – you’d have to be quick to make sure they didn’t get broken.

“You didn’t stand a chance! But as I got older, I bulked up a bit and I was competitive enough.

“I played up until I was nearly 40, mind you I had contact lenses at that stage.”

“It just happened, the night I was elected I was just thinking ‘this is mad’,” Pat says.

“The years seem to have just flown by and I had support during that time, my wife Anne was brilliant.

“I’d always be gone out with teams or what have you, she’d be washing jerseys and helping.

“You have to remember that we were tight on money in those days as well, we had to wash it all ourselves and all.”

In the 1970s and 80s, Pat made it his mission to establish a proper underage structure in the club and he entered the first teams in at under-11 and under-12 leagues.

He was involved with several teams down through the years, winning multiple titles, and also served as a delegate from the club with the Dublin County Board.

The 72-year-old was also a key player in having the bar set up within the club in 1971 and has witnessed the club expand to having a large hall, multiple pitches, clubhouse and other facilities today.

“I get personal pride in seeing how far the club has come since it was founded in 1937.

“They used to call it the old pavilion before I was involved, it was this area that was a dressing room or a social venue, it had to be everything.

“From there to where it is now, the club has progressed so much and I’d like to think it’s on good footing.”

He adds: “You have absolutely nothing without volunteers, it’s a great thing to be part of.

“I’m just one of hundreds of people who have given up their time in this small local area.

“They wouldn’t do it if they didn’t enjoy it either.”

The legacy of Wests involved in St Anne’s GAA Club lives on, with his daughters Amanda and Aisling currently serving on the clubs executive committee while Pat, although not involved in an active role, is their honorary president.

With six daughters and four sons, several members of Pat’s family played sports within the club with his wife Anne a dab hand at camogie.

“I’m president now and that’s a great honour for me to be elected to that position.

“When you get to the age I’m at, being retired as well, time is a lot slower.

“You have time to sit down and read a book, have a meal, run around after the kids maybe, play a little bit of golf.

“I get out for a round with my brother-in-law and a friend of ours, so that’s Thursday accounted for and on Friday, I’m out doing the shopping with Anne. I’m never bored, put it that way.”

Pat is a member of his local church, St Anne’s, which the GAA club was named after, and is currently a Minister of the Eucharist.

Although Pat accepts that things will always move forward and change, he still loves his traditions.

“You have to accept that change will always happen, and change is a good thing… but at the same time, there is nothing wrong with the old.”