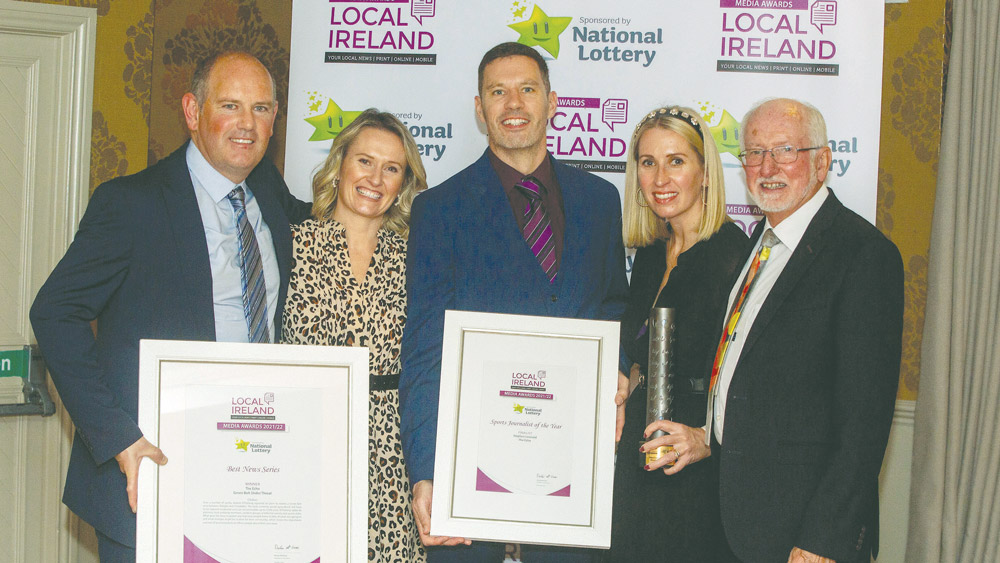 Proudly showing of the ‘Best News Series’ Award at the Local Media Ireland Awards in the Bloomfield Hotel in Mullingar were William O’Connor, News Editor, The Echo, Brenda Mockler, Deputy Editor & HR Manager, The Echo, Stephen Leonard, former Sports Editor, The Echo, who was finalist in the Sports Journalist of the Year category, Emma Kennedy, MD, The Echo and David Kennedy, Executive Editor, The Echo

THE Echo picked up the Best News Series Award at the Local Ireland Media Awards 2021/2022 in Mullingar last Thursday, October 13.

The paper fought off stiff competition to win the award, which was given in recognition of the paper’s ‘Green Belt Under Threat’ series written by Aideen O’Flaherty in 2021.

The series, spanning several weeks, documented contentious plans for a proposed 3,500-unit residential development on a ‘green belt’ between Tallaght and Clondalkin.

The proposed development was to be called Newland’s Farm, but for the plans to proceed the site needed to be rezoned for residential use.

The series tracked the initial proposal by developer Hibernia REIT, the views of local sports clubs and residents’ associations, and efforts for the site to be rezoned and also for it to remain a green belt.

Ultimately, the site wasn’t rezoned for residential use in the current County Development Plan, but the series kept readers up-to-date as the story developed over several weeks.

The paper’s former sports editor, Stephen Leonard, was also a finalist in the Sports Journalist of the Year Award category.

Emma Kennedy, MD of The Echo, said: “We are so delighted to have picked up the Best News Series Award for our coverage on ‘Green Belt Under Threat’, reported by our fantastic journalist Aideen O’Flaherty.

“Reporting on our community issues and raising awareness on the development of their areas is so important, local journalism is at the forefront of informing readers on news that matters most to them, giving our community a voice and an opportunity to be part of the solutions too.

“It was wonderful to spend an evening with so many local regional titles from around the country and congratulations to them all.

“And especially great meeting up with Dave O’Connell, editor of the Connacht Tribune and Gavan Becton, editor at the Meath Chronicle, both of whom started their careers in The Echo newspaper.

“The highest accolade we can receive is for our local journalism, stories that won’t be covered anywhere else with the same care and attention.

“Thank you too to Bob Hughes and all in Local Ireland and the National Lottery for the recognition.”