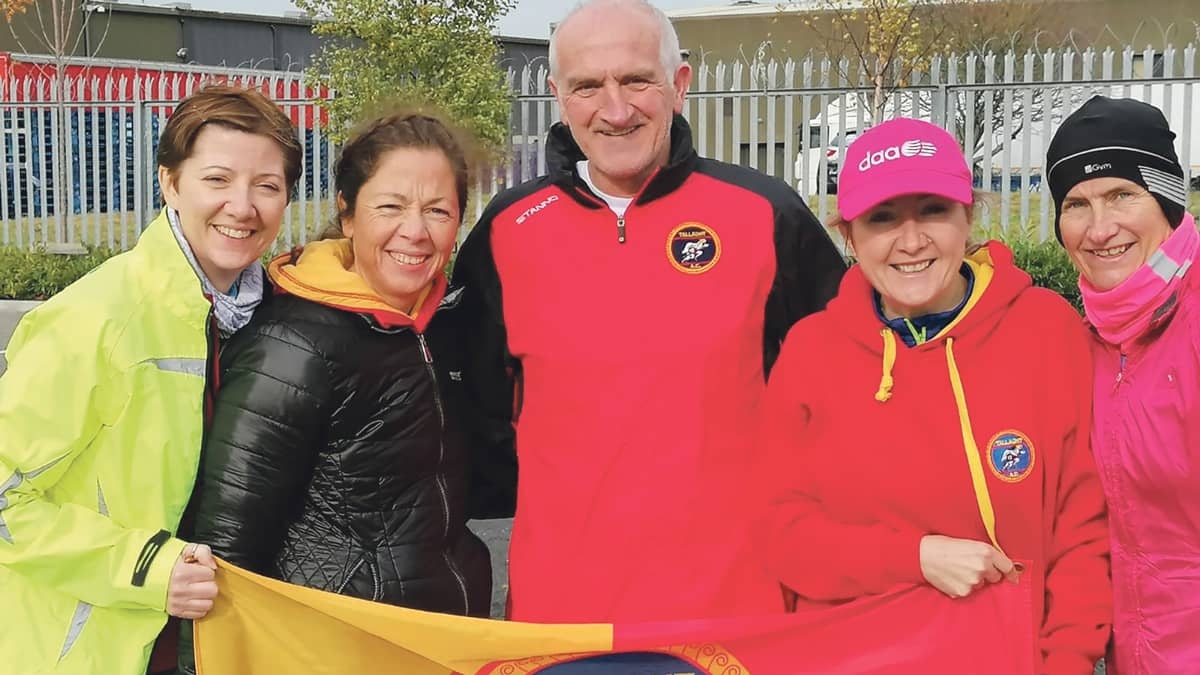 THIS year’s KBC Dublin Marathon was like no other before it, as runners pounded the pavement alone or in small socially distanced groups over the weekend while taking part in the virtual event.

While the runners knew the 2020 marathon would be unlike other years, the additional restrictions which were implemented recently included having to stay within 5kms of your home, so many of the runners had to reroute their original plans.

However, this also gave a local feel to this year’s marathon, as the runners took on the challenge in their local areas including Tallaght and Lucan.

Old Bawn resident Sinead Tighe and her son Daniel, who has a rare condition called Sotos syndrome, have taken part in the Dublin Marathon for the past number of years, but this year they traded the city streets for a route that took them all over their hometown of Tallaght.

“It was so much easier to get Daniel up and ready and leave the house, because we didn’t have to load the rig into the car or battle through crowds,” Sinead told The Echo.

“I was crying when I started running, but I was very proud. I said, ‘Dan, look at us, look at what we’re doing!’.

“This time the marathon was more personal, because the people who are cheering you on are people who have known you all of your life, and have supported us.

Joe and Patricia Geoghegan from the Vine Group

“When I finished I was elated, and I even got a personal best – I was three minutes quicker than last year – even though I hadn’t been properly training because of Covid.”

Husband and wife team Joe and Patricia Geoghegan from Fettercairn were also clocking up the miles in Tallaght over the weekend, and raised funds for local families in need in the process. Like Sinead, they also felt the support of the local community.

“The marathon was very strange in comparison to last year as it was done within the 5k restrictions,” explained Joe, “but there was great support from other runners also out doing the marathon or other runs.

“People also supported us along the way by shouting support or beeping car horns, and even a woman from a local running club who drove round giving runners much-needed water.

“The support from our children, family and friends was very appreciated and gave us a fantastic boost, but above all else the generosity of people who donated through our GoFundMe page is fantastic.

“Because of the pandemic we have not been able to start our fundraising for the Help Us Help Others campaign, and every single cent we raise goes to helping families in need and this year, more than ever, families will need extra help.”

The GoFundMe page for Help Us Help Others is at www.gofundme.com/f/ggcdgf-help-us-to-help-others.

Joe added: “I was especially happy for Patricia who trained all year for this, her second marathon.”

There was a strong showing from the members of Tallaght Athletics Club over the weekend too, with some of the runners taking on the marathon distance in one run, while others hit their running target across several runs over the weekend.

Cecil Johnson from Tallaght AC said: “Prior to the Level 5 restrictions, which included the 5k restriction, the runners had particular routes planned out, but the restrictions meant they had to change their plans.

“If you’re running in a group it can be more competitive, so it’s more difficult to run individually.

“But the runners all did very well, with some of them achieving new personal bests in their distance – which is a fantastic achievement in the current circumstances.”

Lucan was also thronged with socially distanced runners over the weekend, as members of Lucan Harriers Athletics Club took on the marathon distance.

PJ Hyland from Lucan Harriers said: “There was a heap of people who supported the runners and would pace them at different points on the route, while socially distancing.

“Runners of all different abilities and ages took part – it went brilliantly, and around Lucan Village people came out and supported the runners.”

Over 13,000 runners took part in the virtual KBC Dublin Marathon 2020 from October 24 to October 26, and all finishers will receive their medals in the post this year, instead of at the finish line.