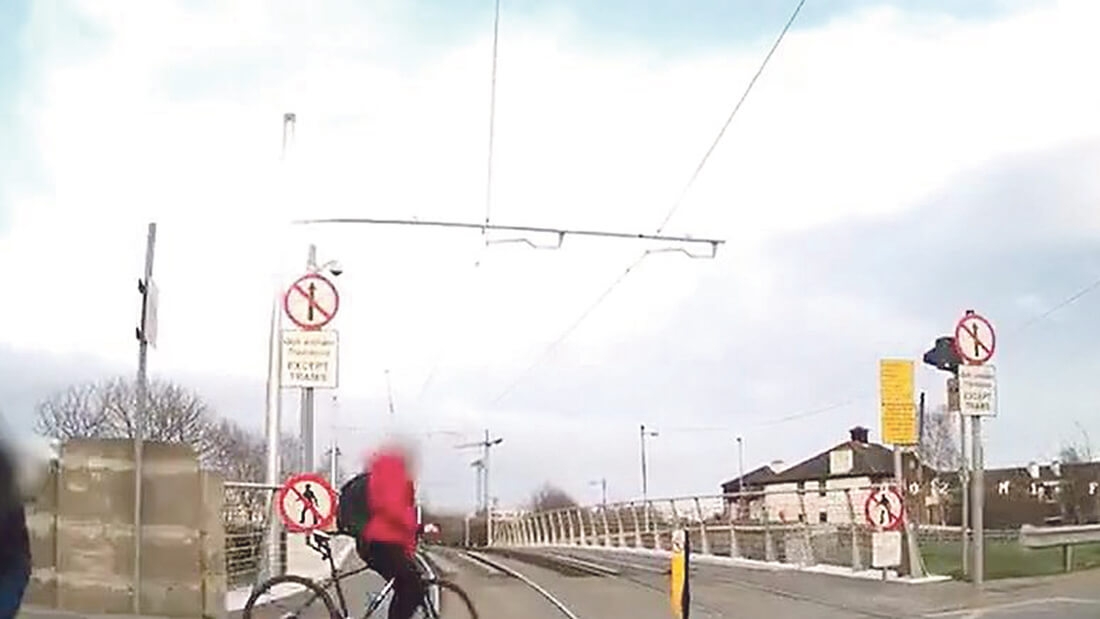 Luas warns jaywalkers and cyclists that only seconds could change lives

LUAS operator Transdev has this week launched an appeal to motorists, pedestrians and cyclists, after tram contacts with both pedestrians and vehicles “slightly increased” since the start of the year.

The city tram service, which is 15 years old this month, had 25 contacts with vehicles, nine with pedestrians and one with a cyclist as it travelled 4.29 million kilometres in 2018.

A cyclists crossing the Luas line (Photo courtesy of Transdev)

In a safety message issued this week, Transdev reminded people that Luas trams travel on a fixed track and cannot swerve, requiring time to break and stop.

“Not breaking red lights and crossing roads and tramways carefully are basic rules of the road which, when broken, can prove fatal.”

Transdev has released CCTV footage in a bid to raise awareness around the dangers posed when motorists and cyclists break red lights or pedestrians walk out in front of oncoming trams – and to remember that “only seconds could change their lives”.

“A tram is on a fixed track, it cannot swerve, and it needs more time to break than a road vehicle.

“Motorists, who often visibly speed up to cross a road junction as opposed to slowing down, need to be more mindful of the potential consequences of their actions.

“Not only is the motorist gambling with his or her life and the lives of others, a collision with a tram results in significant delays to, or curtailment of service for Luas customers.

“When a collision with a tram does occur, Luas passengers are left waiting for the Emergency services to deal with the incident before the all-clear can be given for the Luas service to resume.”