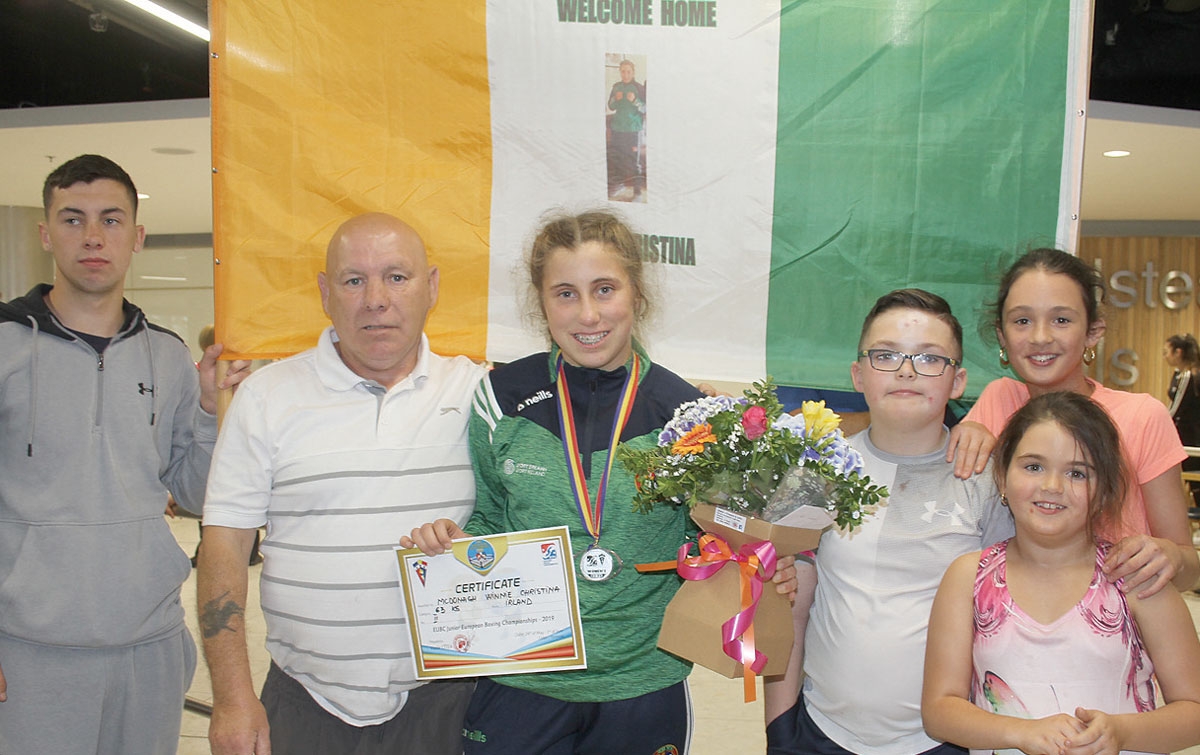 BOTH Neilstown Boxing Club’s Winnie Christina McDonagh and Taylor Guiney of Drimnagh Boxing Club both made the podium at last weekend’s European Junior Champ-ionships in Romania.

The former won three fights en route to the Women’s 63kg Final where she was narrowly edged out by Italy’s Viola Piras on a 3-2 split decision while Guiney also emerged on the wrong side of a carbon copy split in his 66kg semi final against Vladislave Chepizhko of Russia.

Neilstown Boxing Club’s Winnie Christina McDonagh with family and friends upon returning home from Romania where she won silver in the Women’s 63kg division at the European Junior Championships. (Photos by Michael Hade)

McDonagh, who had won gold in last year’s European Schoolgirl Championships, made a very convincing start to her European Junior campaign by beaten Turkey’s Ceren Tuncer 5-0 in the Last 16.

That was followed up with another unanimous decision against Lia Pukkila of Finland before she secured further passage to the decider with yet another 5-0 victory, this time against Germany’s Ani Manukyan.

Up against the taller and more rangy Italian counter puncher, Piras in the final, McDonagh gave it her all in attempting to serve up heavy punches on the inside, but she ultimately fell just short of another continental gold.

“I did all that I could, but it wasn’t enough” McDonagh told The Echo.

“She [Piras] was the tallest of all the boxers I fought and I always knew that it was going to be difficult, but I’ve learnt loads and the experience I got from the tournament was great. All those boxers are nearly 16 and I’m 14 so I’m eligible to compete again.

“Last year I won gold [in the European Schoolgirls] and his year I lost in the Junior Final so I know what it’s like to win and lose, but it gives me something to push for next season” she stressed.

Meanwhile Guiney blazed a trail to his semi final, starting with a 5-0 demolition of Orhan Mehmet of Turkey in the preliminaries.

Another Turkish opponent, Andrei Mustet, awaited him in the Last 16 and again Guiney took a unanimous decision before turning in an equally convincing show against Narek Zakharyan of Armenia in the quarter finals.

The semis pitched him against Russia’s Vladislave Chepizhko and he turned in an impressive performance that, nevertheless, resulted in a 3-2 split defeat.

Proud of the display produced by the club’s rising star, Drimnagh Boxing Club coach William Carruth told The Echo “Taylor had four great fights and many thought he should have gone on and possibly won gold.

“He beat a Turk [Orhan Mehmet] in the prelimin-aries and later came up against a strong Armenian. Taylor won the first round and lost the second, but rallied really well to win the third.

“I know they thought he had beaten the Rissian [Vladislave Chepizhko] in the semi finals and they were flabbergasted when he didn’t’ get the decision.”

“But Taylor has really progressed since he came to us in Drimnagh three years ago. He’s won three National titles and now a European Junior bronze medal.

“If he keeps up this rate of progression he’ll be in elite boxing by the time he’s 19. We’ll have no problem putting him in” he insisted.