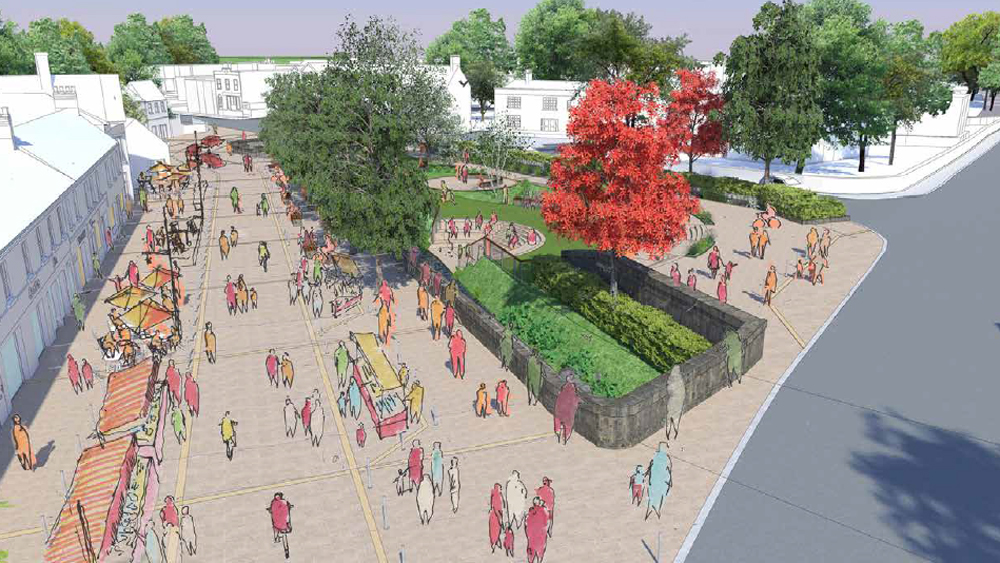 An aerial view artist impression of the plans for Lucan Village

HEALTH services in Lucan village are opposed to plans by South Dublin County Council to reduce parking in the village, stating it will provide only negative implications for local healthcare and businesses alike.

The council plan to roll out a trial for a one-way traffic system between Village Green and the River Liffey Bridge, with a provisional date set for March 2022, as per businesses’ understanding with the council.

Lucan village is an extremely busy commercial hub, and The Echo reporter arriving to meet business owners this week found it was stressful to experience not only securing a parking spot on Main Street, but to try and squeeze out of the car due to the tight constraints.

The council have told ratepayers that the objectives of that scheme are to “discourage unnecessary ‘through’ traffic, improve traffic flow through the village, and provide improved public realm for the public and businesses”.

However, business owners in the Health Alliance – a group of village health services formed in response to the proposal by the local authority, dispute the findings of a council parking survey, which was conducted in May during lockdown.

The council survey determined there was 225 public spaces in the village and concluded that 54 spaces could be removed “without significant impact on current usage”.

“We have a big dispute with that, the data was collected during lockdown in May, which is unreliable and doesn’t reflect availability in the village,” said Dr David Lombard, Main Street Clinic, and member of the health alliance.

The alliance did their count of car-parking spaces in the village and estimate there are approximately 126 spaces for parking.

“There has been no additional parking in the village since 1991, despite Lucan’s population increasing by 15k to 60k,” according to Dr Lombard, who says poor planning has been a feature of the greater Lucan area for 30 years.

Last week, The Echo reported that people in Lucan have been forced to travel outside their area to access GP services.

Cllr Liona O’Toole (Ind) said many new residents are struggling to find a GP, and incredibly, Adamstown still has no GP.

“Sixty thousand is the size of Waterford city. Our population has increased fourfold with no associated increase in parking. In 1991 there was one car spot for every 75 persons in Lucan, now it is one in 300.”

Linda Balfe, principle of Aspen Counselling, has two spaces at the back of her premises on Main Street, and a staff of about 43 to 50 therapists that come in throughout the week.

“The way therapists are doing it, they are running out every three hours feeding the meter, or they feed it via an app on their phone,” said Linda. 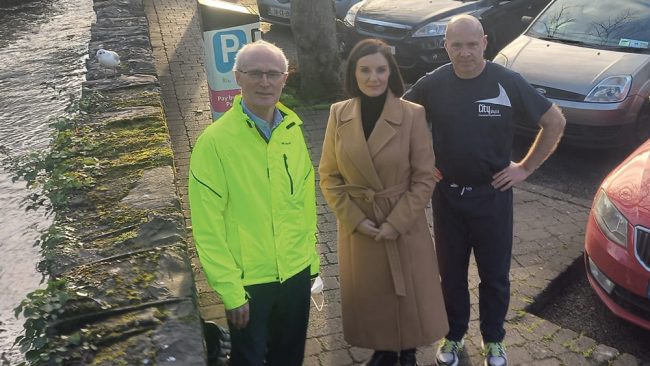 “We have built up our name here in 20 years. Aspen has over 6,000 clients in a year that avail of the service. We are just trying to keep the doors open and accessible for people.”

However, it is not parking alone that is creating pressure for health services and their clients.

John Shenton, principle of City Physio explained: “Even if there were different means of access to the village, that doesn’t apply to an awful lot of our patients who don’t have the ability to go on the bus, or walk in because of the very nature of their problem, whether they have cardiac problems, back pain, or are elderly.

“Just this morning, I had a 70-year-old in with raging leg and back pain, and this guy said ‘I can barely walk 10 metres’ – that doesn’t give you the option to get the bus or walk in.

“He was sent to us by one of the insurance companies, and was given the option of going to Lucan or Crumlin, but he had to hum and hah whether to go to Lucan, even though he is a local, because of the stress involved in trying to find a parking space, but he wanted to stick with us because of our reputation.”

They are seeking information from the council for the methodology they used for a vox pop, the results of which, they were told, will be published following the consultation process in the Part 8 planning.

Once completed and assessed this information will be shared publicly alongside a final planning application.

The council previously said the trial will be assessed, and its outcomes would be used to help Lucan councillors make a final decision.

“Even though they say this is only a draft proposal, it does seem to be a template, and the impression we’re getting is, this is the change that is coming whether you like it or not,” said Dr Lombard.

A key element why the health alliance was formed, is to retain providing health services and take pressure off the HSE, with increasing hospital waiting lists due to cancellations because of Covid.

“The HSE actually locked their doors and stopped seeing patients face to face, whereas, all I can speak for is myself. In June last year when we reopened after the first lockdown, we put all the infrastructure in place, and were able to see clients face to face again,” said Linda Balfe.

“We are all providing services here in the village which is taking pressure off the HSE in many ways, so we will need parking and such facilities. Our services are all about accessibility and affordable and time factor for people, whether they are struggling physically or emotionally.”

As Dr Lombard points out, the Oncology Dept in St James Hospital are still seeing people virtually, and this lack of physical contact has left thousands of people without primary access to health professionals.

“There is one physiotherapist in the HSE available for Lucan and a 12-week waiting time. For HSE counselling, you have to go to Tallaght, a 16-week wait, and psychiatry is several months,” said Dr Lombard.

“We thought when we pointed these issues out to the council they would say that is not the intention, but they and the councillors are very much sitting on the wall.

“We are an established business here over 20 years, know our clientele, and they know us and trust us. We offer a range of health services from counselling to physiotherapy to pharmacy, pain relief to general medical care, and we all work closely together.

“Main Street Clinic would see about 50,000 patients and receive 100,000 phone calls a year. The population now is approaching three workers for every person over 65 in 2035. Every person over 65, on average, has two chronic illnesses.

“Sláintecare is all about trying to manage illness in the community, because if you can manage things in the community, it is better continuity of care, better outcomes, less outpatient attendance, the hospital works more efficiently.

“For every one million euro you put into general practice, you save a hospital seven million, that’s a huge saving. We have an ageing population and a smaller pool of taxpayers. Dealing with things in the community is far cheaper. I do a minor procedure here for €150, but a hospital will charge €1,000 for the bed alone,” explained Dr Lombard.

John Shenton said all businesses are looking for is some “clarity” as to what the plans are.

“One person is saying one thing, you talk to the local councillor and they say ‘they are not doing that’ and then someone else says they are doing that,” he said.