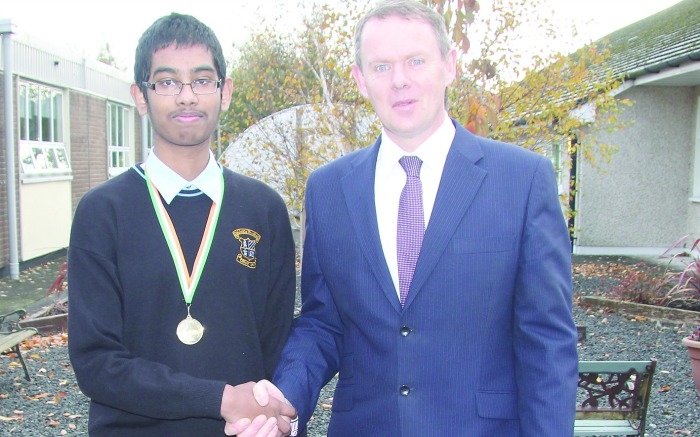 Invitations to take part in the Olympiad went to 126 of the brightest students in the country, who were invited on the basis of academic excellent attained in science in the Junior Cert 2016.

But only six would be selected after a gruelling two-and-a half-hour physics, chemistry and biology exam.

After a tense one-hour wait, the results were announced and Calvin had finished among the top three in the competition.

Calvin, along with the five others, will now represent Ireland in the World Junior Science Olympiad to be held in Bali, Indonesia, in December, the first student from the school to achieve such a remarkable feat.

The Olympiad is a hugely prestigious international competition for students from across the globe who excel in the sciences in state examinations.

Calvin is an extremely ambitious, diligent and pleasant student who studied ferociously for the Olympiad exam so his hard work has been rewarded.

Dáire Byrne almost made it a remarkable double celebration for the school in the Irish round of the EU Junior Science Olympiad held in DCU on November 5. Students had to select a science subject and then sit a two-and-a-half-hour exam in that particular subject.

Dáire chose physics along with 135 others and performed exceptionally well to finish in fifth place. Unfortunately only the top four qualified for the EU final to be held in Copenhagen in December.

With the work that Calvin and Dáire put it, it made it a magnificent few days for the school and they can take great pride in their performance.