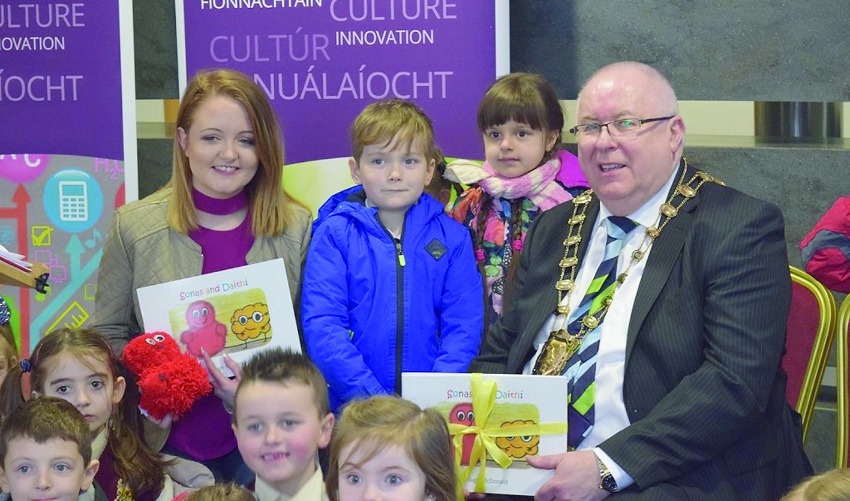 A STUDENT from Lucan is scheduled to see her first book published at the sprightly age of 23.

Orlagh McDonald’s book ‘Sonas and Daithí’ was the winning title for The Design and Book project collaborative project, between the Institute of Technology Blanchardstown (ITB) and the Libraries Department, Fingal County Council.

The book will be published and made available in libraries and beyond to support the development of personal, social and emotional development for children up to six years of age.

As part of a Bachelor Arts (Hons) degree programme in Early Childhood Care and Education, 33 students at ITB were required to develop a storybook that could support the development of children.

The project included readings to junior infants’ classes from Sacred Heart of Jesus, in Huntstown.

Orlagh, a former Lucan Educate Together student, who is in her final year studying early childhood care and education in ITB, was delighted to hear she was to become an author.

“This is my first book ever published and I’m absolutely thrilled with it,” said Orla.

“I have to admit when I found out about the assignment I wasn’t too pleased as I felt I had other subjects to be focusing on instead of writing a book. However It turned out to be such a rewarding and therapeutic experience both writing the book and drawing the illustrations for it.

The idea of the book came from both personal experiences and working with children and seeing their interactions with each other. It’s not easy to deal with bullying or loneliness within schools for both the students and teachers so my hope for the book would be to get a message across in a subtle way.”

The book was published in Fingal libraries and launched in City Hall, Swords.

Orlagh continued: “It was such a memorable day. Organisers did an amazing job with everything and were really welcoming to both myself and my family and friends. I have had such an overwhelming response to the book, with people I don’t even know messaging me on Facebook asking me where they can buy the book for their children.

“I have also had teachers ask me where they can get a copy for their schools. I definitely did not expect the response I got to the book when I was writing it. I would love to see the book in other libraries, perhaps in Lucan and Leixlip where I went to school and maybe one day as a published book that can be bought in shops.”

Sonas and Daithí by Orlagh Mc Donald was launched at the Fingal County Council offices in Swords by Councillor Howard Mahony.