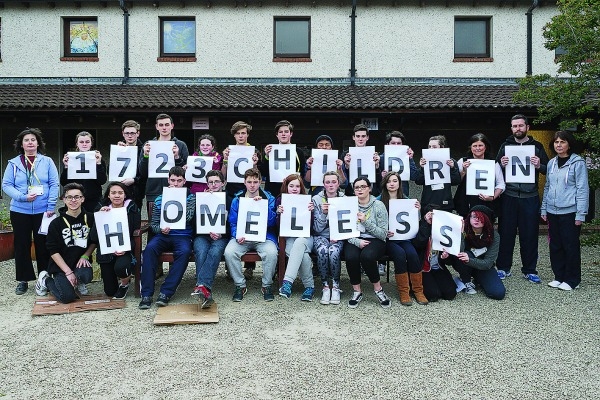 Lucan students sleep out to highlight plight of the homeless

WITH HOMELESSNESS in Ireland being a very live issue, the Transition-Year students at Lucan Community College held a Sleep Out in the school last Friday, May 6.

A hardy group of 29 students and teachers slept overnight in the courtyard of the school to experience what sleeping rough feels like and to raise awareness about homelessness among children in Ireland. The students also raised funds for Amnesty International.

The aim of the Sleep Out was to draw attention to child and youth homelessness across Dublin and Ireland.

The Sleep Out began on Friday evening at 8pm. Students dispersed themselves around the courtyard with cardboard, blankets, and their sleeping bags.

Each student received an identity card for the night that gave them an age, cause of homelessness, and place of accommodation based on the experiences of real homeless people.

The aim of the identification cards was to inform them about the different faces, struggles, and experiences of homelessness that people go through.

Local politicians were invited to the event but couldn’t attend due to the negotiations going on in the Dáil.

Students instead debated the homeless crisis amongst themselves and discussed possible solutions.

The students also gave up their access to technology for the night as part of Amnesty International’s “Give It Up” campaign.

One of the students, Lee Keating, said it was a tough but rewarding experience. He said: “We had sleeping bags and cardboard on the ground. It startéd to rain at three in the morning and we moved into the sheltered part of the courtyard.”

The night certainly took a toll on the students, especially when it began to rain and they had to relocate to a sheltered area of the courtyard.

They found it near impossible to sleep on the cold, hard ground in unpredictable weather and many were more worn out than rested by the time morning came around.

Another student, Oscar O’Shea said: “We wanted to experience what it is like to sleep rough.”

Naoise Hallissey said it turned out to be quite a tough experience.

She said: “It was exhausting. We felt really tired when we woke up in the morning. It was really cold in the morning and you just couldn’t get warm. We just wanted to focus on the problem of homelessness.”

When the rain came down at 3.30am, Vladimir Marcuta said that one got close to the feeling of homelessness.

The Sleep Out ended at 9am and the students received a light breakfast before they went home.

The Amnesty group, as well as the 1st and 5th year religion classes, were also involved in creating an art display of the silhouettes of all 1,723 homeless children in Dublin to draw attention to the crisis and put the number of children into perspective.

This was successfully unveiled on Friday afternoon, attracting a lot of attention and questions from the other students in the school.

As The Echo went to press, the students were unable to tell us how miuch they raised for charity, but they expect it to be in the region of €300.