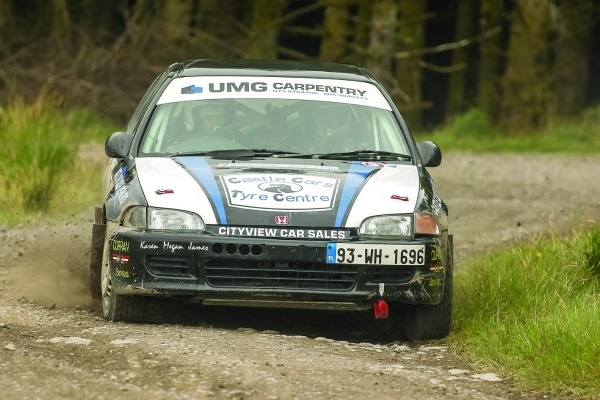 BOHERNABREENA’S Barry Mahon and co-driver Ultan McGowan from Sligo made it three wins from their last three outings to extend their lead of the Valvoline Forestry Championship.

Competing in Round Six of the series in Limerick last weekend, the pair found the going tough early on, having to cope with an electrical fault on the way to the first stage.

While that problem was sorted, they did lose 12 seconds to leader Michael Fitzgibbon from Clare on the opening stage, Adrian Beattie slotting into third.

“This was due to Ultan being able to read the notes and at the same time give me hand signals to explain what was coming next. It was top-class stuff from him,” recalled Mahon.

“We had a good push on Stage Three for about three quarters of the stage and then the intercom failed again,” said Mahon.
“We pushed as hard as we could for the last bit and were very lucky as we hit a bank on a fast slippy section and landed back on all four wheels with little damage.

“We took 11 seconds out of Fitzgibbon and as we entered service we had a five-second lead.

“The service crew got a new intercom fitted and the car overhauled and ready for the repeat loop of three stages.

“On Stage Four Fitzgibbon retired with suspension damage. We went quicker than Beattie by 24 seconds leaving us with a comfortable lead.

“We dropped time on Stage Five with a rear puncture and we drove at a sensible pace through Stage Six as we had no other spare wheel in the car and the stages were cutting up badly,” he said.

They will now be hoping to close out the championship when they travel to Antrim for the final round next month.