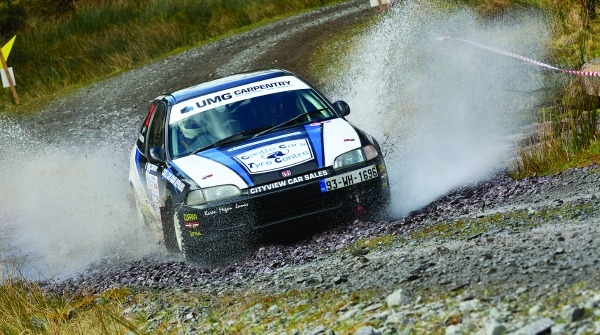 BARRY Mahon from Bohernabreena and co-driver Ultan Mcgowan enjoyed another highly-productive weekend when they contested the Lakelands Stages Rally in Enniskillen.

Coming into this, Round Five of the Irish Forestry Championship, off the back of their win in Cork, the two were looking for more of the same.

Yet Mahon made a strong start on Stage One going three seconds quicker than main class challenger Stephen Dickson in his Ford Fiesta R2.

“We where quickest again on Stage Two by six seconds from Dominic Leonard but on the long 11-mile Stage Three we lost two seconds to Dickson” said Mahon.

“This was partly caused after we had a very heavy landing over a big jump which damaged the exhaust system.

“We also slid wide on a corner which filled the wheel with mud causing a bad vibration on the faster sections.

“We got some work done on the road section before Stage 4 and we went joint fastest with Dickson and we had good runs over Stages Five and Six to extend our lead.

“On Stage Seven, the repeat of the 11-mile stage, we ran into bother losing fifth gear on a very fast section.

“This dropped us time on the long fast sections in this stage, we dropped 10 seconds to Dickson which left us leading by eight seconds going into the final stage.

“Luckily this stage was more tight and twisty so no fifth gear was not a big problem. We pushed hard in it and took the stage by 10 seconds resulting in us winning the class by 18 seconds.

“We where delighted with the result as it was our first time doing the rally and the locals are hard to beat” he explained.”

The result means Mcgowan still leads the Navigators Championship and, with dropped scores now becoming clearer, Mahon tops the Driv-ers Championship with two rallies left, the next one being the Limerick Forestery Rally in October followed by the Glens of Antrim Rally in November.