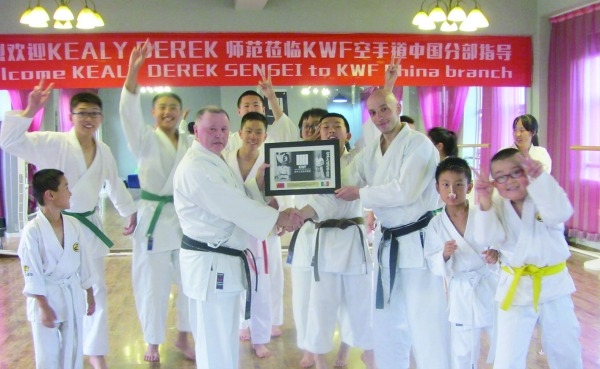 Kealy’s rise continues as he celebrates 50 years in Shotokan

Just back from a 12-day trip to China where he graded the KUF China Branch members at colour and black belt level, the Kilnamanagh man is pursuing his dream of promotion to 8th Dan degree.

“When I was at 1st Dan, the Japanese were at 4th and 5th” recalled Kealy.

“Now they’re at 6th and 7th and we still look up to them, so to be at the same grade as them is a great achievement. It’s 50 years in the making.

“I still go to international courses and I’ll be heading to Scotland later this month for a seminar and the KWF European Championships” he said.

There he will be guiding two members of his Knocklyon Shotokan Karate Club members, Darius Bak and Eddie O’Donnell.

Back from his first ever trip to China which he described as “a great experience” despite cracking three ribs in a heavy fall on a visit to the Great Wall, Kealy received a great welcome and an invitation to return.

Yet he will be looking to firstly focus on completing the two technical exams that currently separate him from 8th degree.

Having previously set up Kilnamanagh Shotokan Karate Club, with whom his son Phil, at Under 14 level, finished third in the World Championships in Hungary, Kealy turned his attention to a new project in Knocklyon near to 20 years ago.

Today that club caters from some 25 members under the ONAKAI banner.