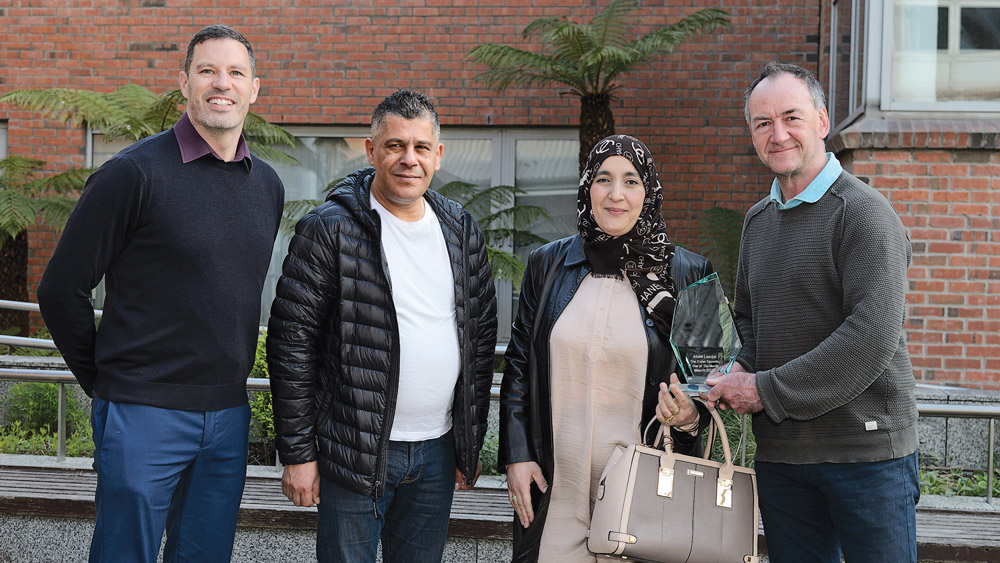 ‘The Echo Sports Star of the Month’ Award for March is accepted on behalf of Lucan’s, Abdel Laadjel, by his parents Houria and Mohamed from Thos McDermott, Co-ordinator, South Dublin County Sports Partnership and Stephen Leonard, Sports Editor, The Echo

AFTER breaking the longest-standing record in Irish athletics, Lucan man, Abdel Laadjel has been declared The Echo Sports Star of the Month for March.

A freshman at the University of Providence in Rhode Island, the Donore Harriers athlete broke the Irish Under 20 record for the 10,000m at the Raleigh Relays Meet in North Carolina last month.

In what is one of the popular early-season track and field events that attracts a huge number of athletes from the northern States, the meet saw Laadjel clock 29.23.92 to surpass the previous national best that had been set by another Donore man, Frank Greally way back in 1970 when he crossed the line in the BLE race in Santry in 30.17.

Laadjel’s time not only shattered Greally’s 1970 mark, but also made him the first Irish Under 20 athlete to break the 30-minute barrier.

That achievement marked another huge step forward for Laadjel who only last December led the Ireland Under 20 men’s team to a superb silver medal at the European Cross Country Championships at the Sport Ireland Campus where he finished in sixth place overall.