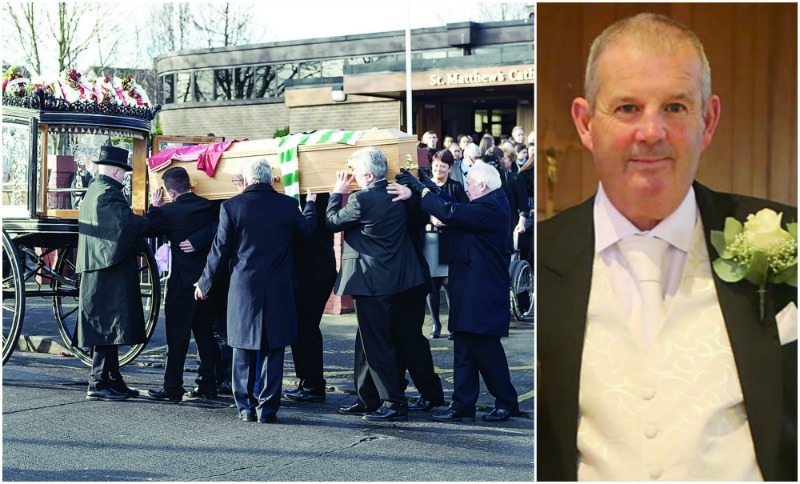 Martin Finn: He gave his life to save his daughter

A VERY MOVING funeral service was held on Tuesday to pay respects to Ballyfermot man Martin Finn – who died tragically while saving his daughter’s life in a road accident last week.

Mr Finn (60), from Gurteen Avenue, was walking along Newcastle Road with his daughter Abbie (18) when they were struck by an SUV on January 17.

Martin pushed Abbie out of the way and took the brunt of the hit.

The pair had been feeding horses in a nearby field and were making their way back to Martin’s wife Carol, who was parked nearby.

“He was my best friend, my hero – the last gift he gave me was to save my life,” said Abbie during the funeral service at St Matthew’s Church.

Abbie was hospitalised with broken bones in her neck after the accident, but bravely took to the altar in a neck brace after an ambulance brought her to the service.

In front of a packed congregation, she thanked Tallaght Hospital and the Mater Hospital for their support, and said they were praying for the SUV driver and their family.

“We do not want my dad’s legacy to be your suffering, as that is the last thing he would want,” said Abbie.

Abbie, who gave birth to Martin’s first grandchild Arthur on November 1, said she was “glad we got to spend Christmas together.”

His legacy, according to Abbie, was his love for animals, which she said will continue through her and Arthur.

She thanked her mother Carol, the “rock” in her life, and said Arthur will support her throughout this time, before returning to her seat to standing applause from mourners.

Fr Joe McDonald said he “balked” when he heard Abbie wished to speak at the service.

“Not for me, but for her. I thought it was too much,” said Fr Joe. “But she wanted to and spoke bravely – you could hear in her voice, the sadness, pain, and love for her father.”

Fr Joe said priests often exaggerate the lives of deceased at funerals, but “Martin would not want to be cannonised.”

“You talked of his legacy in animals, but his best legacy is you,” said Fr Joe to Abbie.

Fr Joe said the forgiveness in the family’s heart for the driver involved in the accident, epitomised the strong spiritual bond in the family.

Among the congregation were students from Abbie’s former school Caritas College.