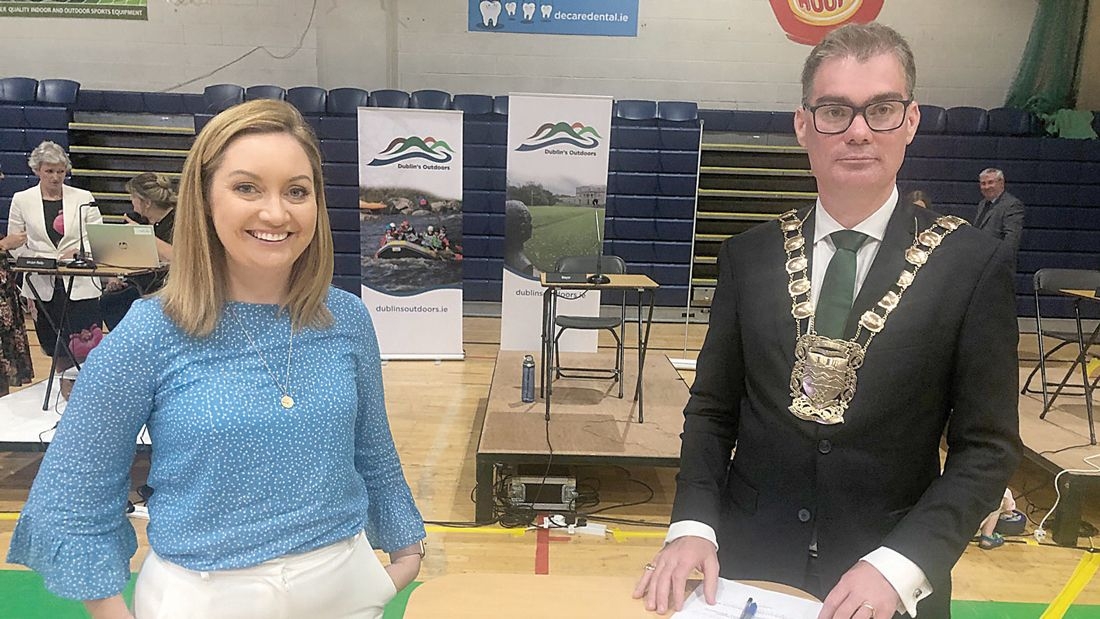 Mayor says we must find new ways to connect community

Mayor O’Brien, who is a councillor for the Lucan local electoral area, was elected mayor by his fellow councillors in the National Basketball Arena in Tallaght, as the larger venue allowed social distancing to be adhered to.

In his acceptance speech, Mayor O’Brien said: “I’m truly humbled to stand before you today and accept the role of Mayor of this County.

“I welcome the opportunity to represent you and our County for the next 12 months and to be a standard-bearer in the challenging months which lie ahead.

“Whilst this is a great honour for me and my party, this is first and foremost an invitation to connect with the community of South Dublin County on your behalf, and this is a role which I will embrace and carry out with great energy.

“I take up this position at a time of great uncertainty and indeed great worry for a lot of our community.

“Over the next twelve months, as we emerge from under the fog that is this virus, we must find new ways to connect with our community and deal with the new tests which that community now faces.

“In this year I will be conscious of the role that I, as your Mayor, must play in assisting you and this Council to tackle these issues together.”

Mayor Ed O’Brien with his wife Jen, son Donagh and parents Odhran and Tina along with councillor Charlie O’Connor in the National Basketball Arena on Friday

The mayoral chains were handed over to Mayor O’Brien by Vicki Casserly, Mayor for 2019-2020 and a Fine Gael councillor for Lucan, who ended her tenure on Friday after a year of representing the region.

Cllr Casserly told The Echo: “Even though we’re from different political parties, Ed is a long-time friend of mine and I know he’ll do his best, and will be a capable and confident mayor.”

When asked about how she felt about her year as mayor, Cllr Casserly said: “I committed to giving every ounce of my enthusiasm and energy to the role, and I achieved that.”

She added: “I visited Tusla’s orange room in Tallaght, I visited a Mother and Baby Homes survivors’ group…and we also had the natural playspace programme – and I aimed to make parks more accessible for everyone.

“I learned that there are a lot of unsung heroes in South Dublin County, who aren’t always seen at the forefront but are very active.

“I wanted to spend my time as mayor willing to be involved in things – not just to be a figurehead, and I made the office of mayor more approachable.”

As Mayor O’Brien is preparing for his new role, Cllr Casserly is looking forward to taking a step back after a very busy but rewarding year as Mayor of South Dublin County.