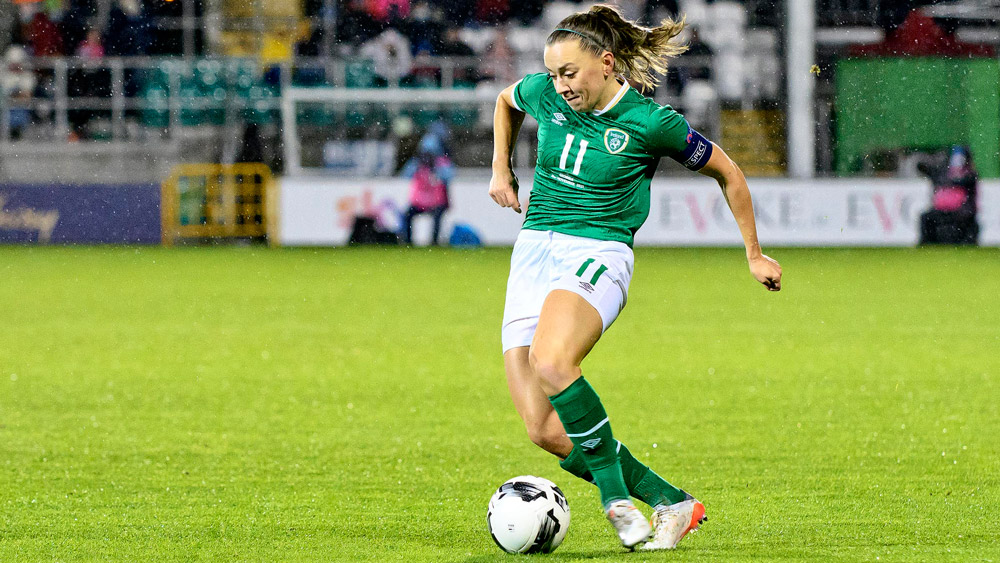 They were so close to coming away with a landmark victory, but the Republic of Ireland women’s national team nonetheless continued their quest for World Cup qualification with an excellent 1-1 draw against world number two Sweden at Gamla Ullevi in Gothenburg this evening.

Thanks to a 44th minute goal from Kilnamanagh’s Katie McCabe – her 14th at international level – Ireland took a shock lead and remained in the ascendancy until Kosovare Asllani eventually responded for the Swedes 11 minutes from time.

As a consequence, the hosts have now secured automatic qualification for next year’s World Cup finals in Australia and New Zealand.

Although Ireland are now third in the Group A table, they are just two points adrift of Finland with a game in hand and Vera Pauw’s charges can move into the play-off with a win over Georgia on June 27.

For this crucial encounter – played in front of a crowd of over 12,000 – McCabe was leading out the Irish team as captain. Although natives of Wicklow, Cork and Galway respectively, Louise Quinn, Denise O’Sullivan and Heather Payne have represented Peamount United in the past.

They were all central figures in the visitors’ starting line-up, while current Peas skipper Aine O’Gorman was listed amongst the substitutes.

The connection to the Newcastle club didn’t end there as Claire Walsh and Amber Barrett – now playing abroad after previously starring for the Greenogue outfit in the Women’s National League – were also named in reserve.

Ireland were forced deep for the vast majority of the opening period with the Swedes dominating possession as anticipated.

The vision of midfielder Hanna Bennison released veteran Real Madrid striker Asllani just past the half-hour mark and netminder Courtney Brosnan breathed a sigh of relief when her effort rebounded off the crossbar and away to safety.

Although this looked like a sign of things to come from Sweden, Ireland sensationally edged in front in the closing minutes of the half.

Picked out on the edge of the area by O’Sullivan – after her free-kick into the box had been partially cleared – McCabe unleashed a firm strike that took a deflection on its way into the net.

This put Ireland in a dream position, but an attacking onslaught was expected from Sweden on the restart.

Substitute Filippa Angeldal was close to restoring parity in the 61st-minute, but Brosnan superbly tipped her snap shot onto the crossbar. The longer the action progressed, however, the closer Ireland came to pulling off a significant scalp.

It looked like it might well be their night when McCabe’s Arsenal team-mate Stina Blackstenius missed a glorious chance with Brosnan out of position, but their stubborn resistance was finally broken on 79 minutes.

After finally discovering some space in behind the Irish defence, Asllani clinically fired home her 40th senior international goal.

Sweden bombarded the goal during the closing moments of the tie, but with the outstanding Brosnan turning away Fridolina Rolfö’s drive from distance, Ireland held out for a deserved share of the spoils.