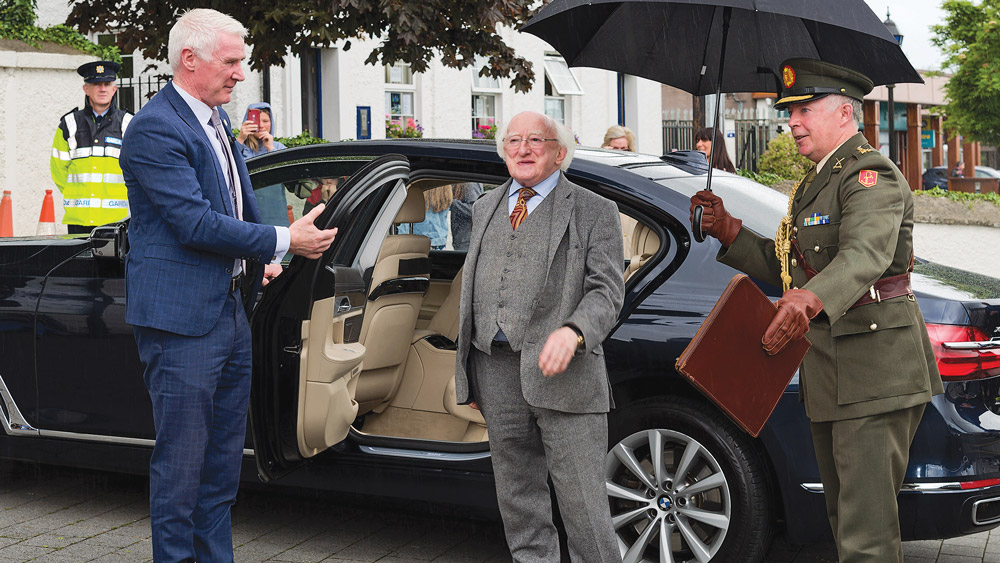 A MEMORIAL plaque celebrating the work and life of Winifred Mabel Letts has been unveiled by President Michael D Higgins.

Opened by President Higgins, the commemorative event celebrating the life of Ms Letts took place at the Church of Ireland, Rathcoole on Wednesday.

Following her death in 1972, at the age of 90, the novelist, poet and playwright was buried in an unmarked grave in the Rathcoole parish church cemetery next to her husband.

The memorial event, which took place on the 50th anniversary of her death, was presided over by Reverend Alan Rufi and featured a presidential address before Mervyn Ennis made a presentation.

Mervyn Ennis is a local historian who was the core driving force behind the memorial celebration.

A reading of some of Winifred’s poems took place while there was a music recital by Rathcoole harpist Ashling Ennis before the unveiling of the plaque and visit to her grave took place.

Pat Donnelly, a sculptor from Tallaght, created a bronze sculpture especially for the day called The Way of Hands.

Winifred’s niece, Oriana Conner, was also present to celebrate the life and work of her aunt.

Some of Letts’ best poems are about the ups and downs or rural and urban life in Ireland, after she moved to Dublin in 1904 following the death of her father.

By 1914, Winifred had become the second woman to have had plays accepted by the Abbey Theatre and published nine novels and a book of poems by that stage.

In 1915, she received medical training and practised massage therapy, an early form of modern physiotherapy, to injured soldiers returning from war at Linden Auxiliary Hospital in Dublin.

Originally from Manchester, Winifred began writing poetry about the casualties of war, demonstrating a profound understanding of the psychological trauma, and suffering of young soldiers.

Considered to be ahead of her time, Winifred’s empathetic acknowledgement of the humanity of her subjects stands in stark contrast to the narrative of the time.

Following the death of William in 1943, Winifred lived in Kent in the UK for a brief time before returning to Ireland in 1950 and later moving to a nursing home in the 1960s.