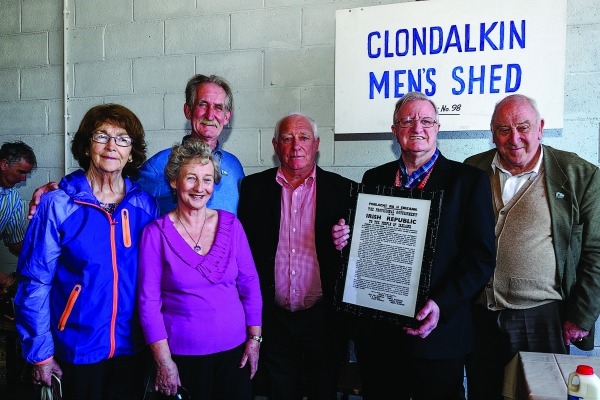 Frank Cousins, an Oakwood Grove resident, traipsed across the Clondalkin area for two years in an effort to find a location, and was near the end of his tether, when an opportunity arose.

“I knew someone in the senior citizen women’s club, and they told me to ring a number,” said Frank (69).

“Some of the places I looked at, were looking for massive rents, but we managed to get the use of a garage at the back of a woman’s house near St Brigid’s Well.

“We officially launched the Clondalkin Men’s Shed on Wednesday, and are registered with the national Men’s Shed organisation.”

The Irish Men’s Shed Association was set up in 2011, to improve and maintain the health and well-being of members.

A registered charity, the organisation make it as easy as possible for any group of men to set up and run a Men’s Shed.

Frank says the club already has 19 men on board, and that there are further men who want to join up with the group.

He continued: “I want to thank the woman for providing us with this venue. Tome Lennon is our Secretary, and Fintan Mulally is our Treasurer.”

Anyone who is interested in joining the Clondalkin Men’s Shed, can call 085 7508230, or email clondalkin@mensshed.ie