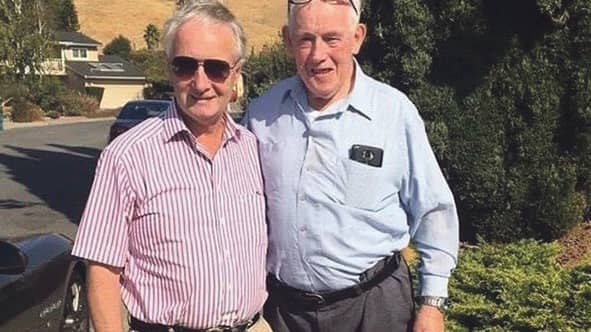 Michael ‘is very much loved and such a wonderful caring man

BIRTHDAY celebrations were badly hit by the latest Covid restrictions, but it did not stop Clondalkin man Michael Lally from enjoying his 70th with a few close family members at home.

A planned family party in Quinlans had to be cancelled, while Michael’s son Glen, who works for Google in Silicon Valley, could not make the trip back to Dublin due to the pandemic.

Glen, a former Echo paperboy as a teenager in the 90s, and a qualified pilot, could also not return home to celebrate his 40th birthday with his family in July.

Michael was born in Gort, Galway and lived for the first few years of his life at the infamous Tuam Mothers and Baby home.

Tuam was the centre of an international storm in 2014 when local historian Catherine Corless’s relentless work discovered the bodies of nearly 800 babies in a septic tank.

“My Dad thankfully was a survivor of that home,” said Lisa Gray, Michael’s daughter.

“He was fostered out at five years old to a family in Swinford, Mayo, where he lived until he left at 17 to join the Aircorps in Baldonnel, where he was an aircraft technician for 25 years but is retired now. He has been married to my mum Catherine Lally for 46 years, poor soul!

“But there’s more to his story, of two brothers meeting who didn’t know they even existed.

He heard a few years ago through a cousin Sean, who lived in New Zealand, that he also had an older brother Des Lally. Des had also lived in this home when he was a little boy and they had actually been in the home together as brothers but were never told or made aware of this fact.”

Des emigrated to Oregon, USA and when he started to trace his family roots in Ireland, he found out about Michael.

“They actually look so alike and Irish it’s funny. We’ve all met Des on trips out to visit my brother in California, and amazingly Des’s daughter actually only lives 20 minutes from where Glen lives.”

Michael is a father of five and has nine grandchildren. He has lived in Clondalkin for about 44 years, Neillstown first before the family moved to Cherrywood.

“He’s very much loved in Clondalkin and such a wonderful caring man – the best Dad a girl could have, he loves his family more than anything,” said Lisa.