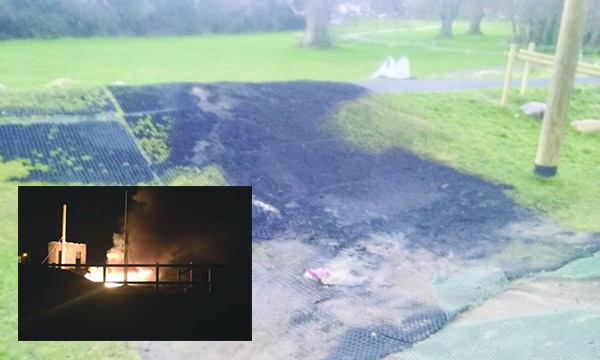 RESIDENTS have vented their disgust over the latest vandalism attack in a Lucan park – labeled as “mindless violence” by one local councilor.

Vandals set fire to a go kart at Hermitage playspace on Thursday night, which in turn, destroyed rubber matting.

The playspace in Hermitage Park cost €65,000 to install over a year ago, and is a popular facility for young kids aged up to 10.

However, large groups of teenagers hang around the playspace during the day and at night, leading to an atmosphere of “intimidation” and “unsuitable graffiti.”

Some local parents are discouraged from bringing their children to the facility due to the anti-social activity.

Sinn Féin Councillor Danny O’Brien witnessed the damage at 7.30am to following morning, and says problems need to be “sorted out around the park.”

Cllr O’Brien said: “We’ve had meetings with residents and Ronanstown gardai, who have been very good.

“It’s mindless violence and disgraceful that this happens to something which is so well used. If they get can get away with this, what next.”

One local parent blasted an “appalling lack of respect whoever did this”, whilst many have called for parents to take responsibility for the kids late night behavior.

A South Dublin County Council spokesperson said: “On inspection it was found that the fire was due to a plastic go cart being set alight on the rubber matting. Although a number of rubber mats were burnt, no equipment was damaged.

“The affected area is due to be cleaned early this week. No remedial works are necessary as the damaged matting was due to be removed in a number of weeks to facilitate new play items designed for children under eight.

“When this work is underway it is also planned to enlarge the sand area as it is proving very popular with local parents and children.”

Griffeen Valley Park has also been subjected to a litany of anti-social abuse over the last number of years by teenage vandals.