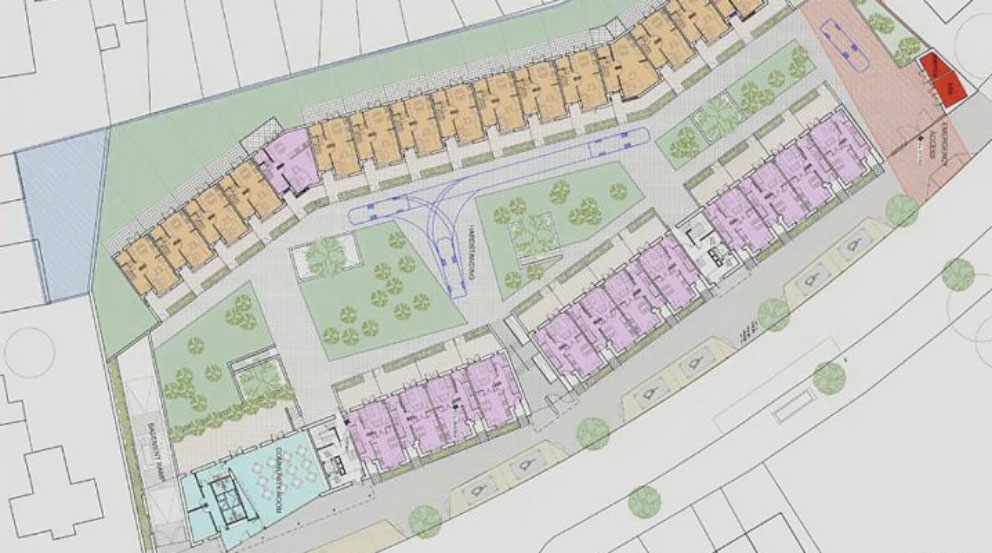 Minister is accused of meddling in homes plan

THE Department of Housing and Minister Eoghan Murphy have been blasted by Ballyfermot councillors over “meddling” delays in the construction of 60 new homes at the former senior citizen housing site in Cornamona Court.

During a presentation in 2017, architects involved with the project told Dublin City Council they understood work at the site was due to begin in mid-2018.

A plan of Cornamona Court.

The plans are for 30 senior citizen homes, with the remaining 30 going to those on the general council housing list.

However, according to councillors, the only development over the last two years is that the location has become a “dumping pit” for illegal waste and they have no idea why funding has not been released.

“I’ve had many meetings with planners, but every-time we try to put a digger on site we are blocked,” said Daithí Doolan, Chair of the Housing SPC.

Speaking at the Dublin South Central area meeting on Wednesday, Doolan said councillors initially scaled back on the amount of housing they wanted at the site because the Dept said “no to social housing.”

“One would get the impression that there is no housing crisis – it typifies the lack of responses from the minister and bureaucrats in Custom House,” he said.

“Now we are told the Dept won’t release funding. We removed accommodation on this site to make way, and it has become a dumping pit.”

He said: “I notice we are always told it will be two months later, but never told the year. I have no doubt department officials are in full belief of what they are doing, but it just goes to show you how the minister can meddle in something and be out of touch with reality.”

Cllr Greg Kelly, who lives beside the Cornamona site on Convent Lawns, said he has heard “no objections” to the development in the community.

“No neighbours have complained, but they always ask me when is work starting,” he said.

“When will the minister and the department make a decision.”

Councillors agreed to forward a copy of Cllr Doolan’s motion to Minister Murphy, highlighting their frustration at the delay.

A spokesperson for the Department of Housing, Planning & Local Government told The Echo they are “committed to progressing this project.”

“Recently the Department issued Stage 4 Approval with a recommended budget cost for the scheme.

“This is subject to issues on the cost benefit analysis as raised by the Department of Public Expenditure with DCC being finalised.”