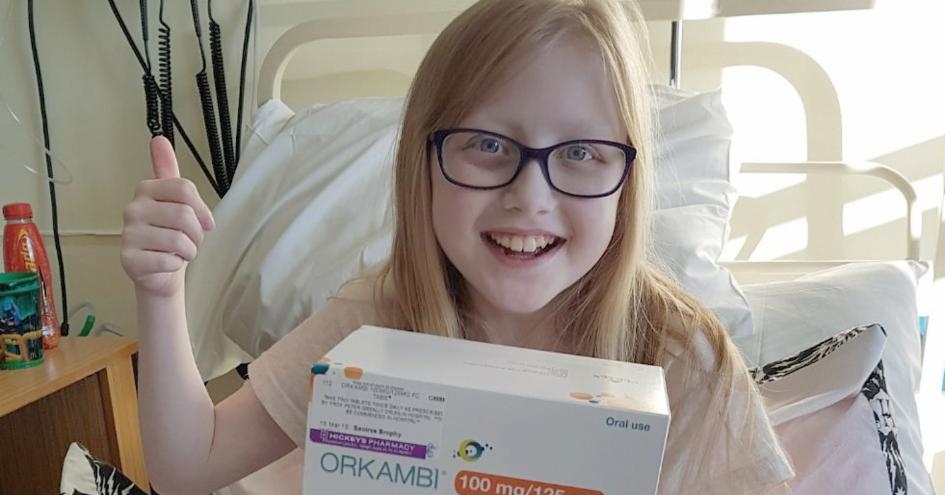 SAOIRSE Brophy gave The Echo a thumbs-up this week when the Tallaght 10-year-old started ‘miracle’ Cystic Fibrosis drug Orkambi – which signals the “start of her future”.

Saoirse is no stranger to the The Echo, with the bright Solas Chriost student first gracing the pages of her local paper back in 2013 – when she was chosen to participate in a Cystic Fibrosis Ireland campaign, which positively promoted those living with the disease in Ireland.

The fourth class pupil also hit the headlines, both locally and nationally, in 2015 when she became a zookeeper for the day, thanks to children’s charity Make-A-Wish.

However, most recently, Saoirse and her mam Siobhan shared their story as part of a nationwide campaign that called on the Government to approve a Cystic Fibrosis drug called Orkambi – with Saoirse even sending a message to the Minister for Health, Simon Harris.

After a lengthy parent-led campaign, Orkambi was approved last spring, with Saoirse starting Orkambi, which is dubbed a “miracle’ drug for some CF patients, on Monday.

Since starting the new drug, Saoirse will spend a few days in Tallaght Hospital where her progress will be monitored.

“Orkambi involves taking two tablets twice a day and it breaks down the mucus that otherwise sits on Saoirse chest and can cause infections.

“We noticed a difference immediately in terms of the mucus sitting on her chest and she had more energy.”

She added: “Monday signalled the start of Saoirse’s future.

“We couldn’t let ourselves think of [her] future before now.

“Saoirse should be able to attend school more often, she’s missed 45 days from the school year since September due to CF.

“From here on in, she will be able to take part in more activities and have a ‘normal’ childhood.

“She will have to maintain her current regime but our days will be our own for most of the year now.

“We can plan holidays, go to parties and say ‘yes’ to anything we are invited to now.

“I now wonder with delight what Saoirse’s future will hold.

“We no longer will have the dreaded ‘life expectancy’ hanging over our heads.

“Saoirse will live a full and happy life.”

While many families like Saoirse’s had to fight for the approval of Orkambi, Siobhan has thanked the Minister for Health Simon Harris for eventually reaching a “yes decision”, which without she would still be living in a “very dark place with no way out”.

Siobhan and Saoirse also thanked the CF unit in Tallaght Hospital and the local health facility’s nurses and playroom staff, the principal and staff at Solais Chriost in Belgard, Cystic Fibrosis Ireland and their family, friends and Saoirse’s classmates.

They also extended a massive thank-you to the readers of The Echo, many of whom, after reading an article, stopped Siobhan to ask after Saoirse’s health, and to pass on “kind words and well wishes”.

“I realise now how many people we have had looking out for us,” Siobhan said.

“How many people have touched our lives.

“I’ll never be able to express to them all how much their support has meant to us.

“It’s been one tough journey, but things can only get better from here on in.”