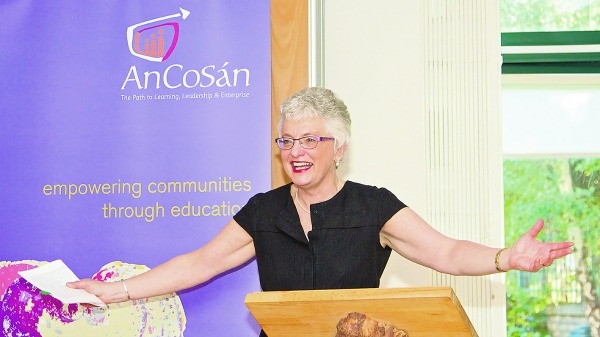 THERE has been a mixed reaction to Independent TD Katherine Zappone’s road to a Ministry in the new Cabinet of re-appointed Taoiseach Enda Kenny.

In recent days, a number of Dublin South West constituents have expressed disappointment and anger that an Independent TD, who represents some of the country’s most disadvantaged communities, would row in behind Fine Gael and Enda Kenny.

However, others have acknowledged the work Minister Zappone has done in Tallaght over the past three decades, seeing her appointment to the Ministry for Children and Youth Affairs as well-deserved and a positive development for Dublin South West – giving a voice to those who live across the diverse constituency.

Some 70 days after the General Election, Taoiseach Enda Kenny revealed his new cabinet, which saw Independent TD Katherine Zappone, who is a co-founders of Jobstown-based education centre, An Cosán, announced as the new Minister for Children and Youth Affairs.

Speaking on her appointment, Minister Zappone said: “It is with enormous pride and a great sense of responsibility that I take up the role of Minister for Children and Youth Affairs.

“I have spent a huge part of my career working in children’s services and education, and it has been one of my life ambitions that we ensure all children get an equal start in life.

“One of the key principles of my election campaign was the belief that investing in children is the best way to cut poverty and inequality.”

She added: “I look forward to bringing my experience in this sector to greatly improve outcomes for all children in Ireland, whether it is from the early days of co-founding An Cosán in Dublin South West 30 years ago and establishing nine non-profit childcare and early education centres, working on the Childcare 2000 campaign as CEO of the National Women’s Council, or leading the establishment of the Tallaght West Childhood Development Initiative, an Area Based Childcare programme.

“As this Government does not have a majority, I have great hope that there is a genuine opportunity for TDs to work together and bring forward innovative ideas to improve the lives of people in Ireland. If any TD, Government or Opposition, has a workable policy, my door will be open.

“To solve all the issues Ireland is facing, I believe the Government and Opposition will need to look at all future spending and policies through a lens of equality, guaranteeing that we provide fairness to everyone irrespective of gender, colour, creed or social background.”

In the run-up to the General Election, affordable childcare, schools and issues around child poverty, which rose during the recession, were among the issues raised on the doorstep by Dublin South West constituents – with many now hopeful that Minister Zappone will be a strong voice for families in the area, implementing change and creating a more level playing field for all children and young people.