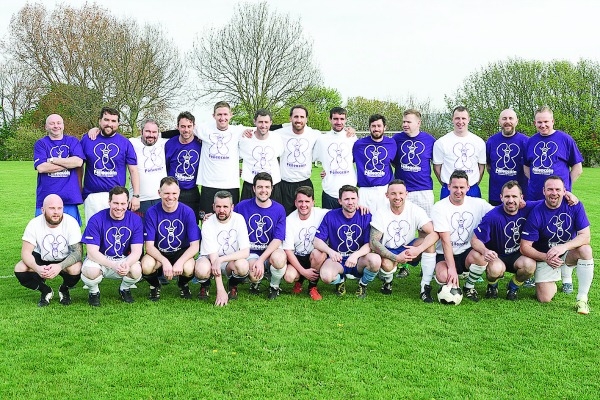 €6,000 raised for stillbirth and neonatal death association at charity game

THERE was over €6,000 raised for the stillbirth and neonatal death association of Ireland, Féileacáin, during a fundraiser last weekend at the Lissadel United reunion party and charity match in Crumlin.

The fundraiser was held in memory of Conor Michael Murphy, who was stillborn at 38 weeks to parents Sinéad Doyle and Mick Murphy last August.

Conor’s Crusaders faced the Shooting Stars in the charity match, with the players then heading on to the Gate Bar in Crumlin with €6,182 raised so far for the charity which helps the parents and families of babies who are stillborn.

Speaking to The Echo, Conor’s mother Sinéad said: “It was all so emotional. My partner, Mick, played in the match and the fundraiser afterwards had around 220 people.

“I gave a speech, which has since been posted on Facebook and has gotten over 300 comments and likes.
“After I finished up the speech, we raised a glass to Conor. There was also a lovely moment where my son Liam was presented with a signed baseball cap, postcard and other gifts from Barcelona FC.

“Special thanks has to be given to Alan Sexton, he really organised all of this. We’ve also got another fundraiser for mothers and toddlers this week in the Spraoi play centre and then we have the marathon coming up.

“The money raised is so important for Féileacáin, a cuddle cot costs about two-and-a-half-thousand euro and it means families can hold and see their babies for three or four days.

“It’s only because of Féileacáin that I got to smell and hold Conor. This money will also help Féileacáin give memory boxes.

“It’s helping other parents and families in the same way they helped myself, Mick and our families.”