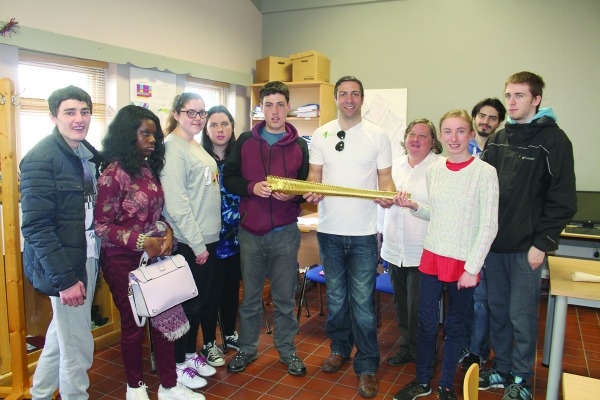 BOXING Olympian Councillor Kenneth Egan visited National Learning Network in Tallaght recently to meet with students and talk to them about overcoming challenges they face in life and the importance of education.

Cllr Egan met the students as he toured the centre on the Broomhill Road learning about the range of courses and supports that are offered by National Learning Network for people who need extra support in learning due to a disability, a mental health issue or a setback they’ve had in life.

He also presented certificates to students who had participated in the IASE’s recent Job Shadow Initiative with local Tallaght businesses.

Cllr Egan spoke about how he was a working-class guy with a dream.

He spoke honestly and openly about the doubts that he had had, about challenges he faced and how after winning his Olympic medal he faced his biggest challenge – what to do next.

With a message that anything is possible once you believe in yourself, he spoke about the importance of education, saying that it’s never too late and he himself is back studying in college.

The students appreciated Cllr Egan’s honesty and were inspired by how he has overcome challenges in his life.

Arron Sheridan said: “Kenneth is a remarkable guy, His story, what he has done, it’s inspiring. He brought in the Olympic Torch and it was a once-in-a-lifetime experience to see that.”

Elsa O’Brien said: “It was really good to meet him. He is a fascinating person. He has achieved his goal. We told him about our course and what we do here.”

Cllr Egan was fantastic. He spent so much time talking to the students, hearing their stories and encouraging them. When he spoke, everyone was enthralled.

The place has been buzzing with excitement since. It’s great for our students, many of whom have faced challenges in life, to hear Kenneth’s inspiring story about how he got where is is today.”