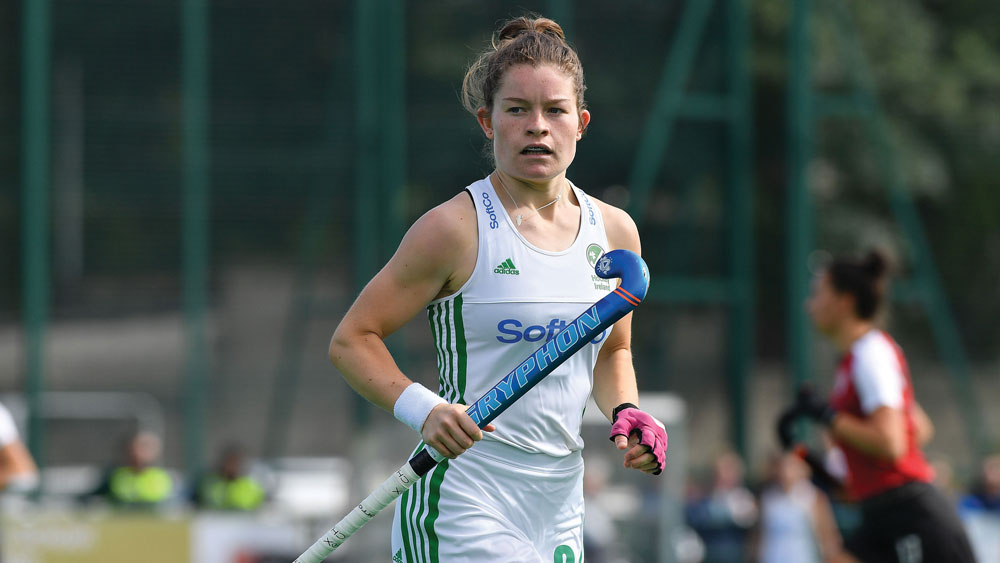 Knocklyon native Sarah Torrans was named in the starting line-up

Whereas the women’s team – coached by Sean Dancer – reached the final stage of their qualification tournament with a gutsy 3-2 victory over Belarus in Italy, their male counterparts suffered an agonising penalty shootout elimination at the hands of Wales in a pulsating encounter in Cardiff.

Having reached the showpiece decider at the last World Cup in 2018 and competed at this summer’s Olympic Games in Tokyo, the expectation levels for the Ireland women’s hockey team have significantly risen in the past few years.

Although former Glenanne and Loreto head coach Graham Shaw has moved on to manage the New Zealand women, Dancer continues to call upon a number of local stars at the international grade.

Knocklyon native Sarah Torrans was named in the starting line-up earlier today, while Loreto netminder Liz Murphy and Deirdre Duke (formerly of Three Rock Rovers in Rathfarnham) were listed amongst the substitutes.

Ireland were determined to set their stall out in this game and sent out an early statement during an action-packed beginning to the contest.

Lena Tice and Anna O’Flanagan both rattled the net to give the Green Army a 2-0 advantage inside the opening four minutes.

Belarus responded quickly through Sviatlana Bahushevich, however, and Ryta Batura subsequently fired home to wipe out the Irish lead.

They threw down the gauntlet to the 2018 finalists, but UCD’s Niamh Carey came up with the goods on 48 minutes to swing the outcome in their favour.

As a result, the Ireland women are just 60 minutes away from qualifying for next year’s World Cup finals in Spain and the Netherlands.

Wales will provide the opposition in tomorrow’s tournament decider, which gets underway at 3.30pm Irish time.

They will be hoping for greater luck against the Welsh than the Ireland men’s hockey team after they were cruelly denied a spot at the 2023 World Cup in India by their Celtic rivals this afternoon.

His country’s all-time top-scorer with 110 goals, Knocklyon man Shane O’Donoghue was part of a game Irish effort on the day.

Like the Ireland women before them, they couldn’t have asked for a better start.

Following a superb turnover by John McKee, Michael Robson found the net with just two minutes gone on the clock.

Ireland remained in the ascendancy at the end of the first-quarter, before Wales eventually fought back with a goal from Joseph Naughalty on 19 minutes.

This left the tie finely balanced and with so much at stake, it was always unlikely to turn into a goal fest.

Mark Tumilty’s charges attacked in waves as the final whistle approached, but the Welsh defence held firm under intense pressure.

This ensured penalties would be required to determine a winner of this crunch encounter.

Unfortunately, with captain Sean Murray the only one to find the target, Ireland ultimately fell to a heart-breaking 2-1 defeat in the shootout.