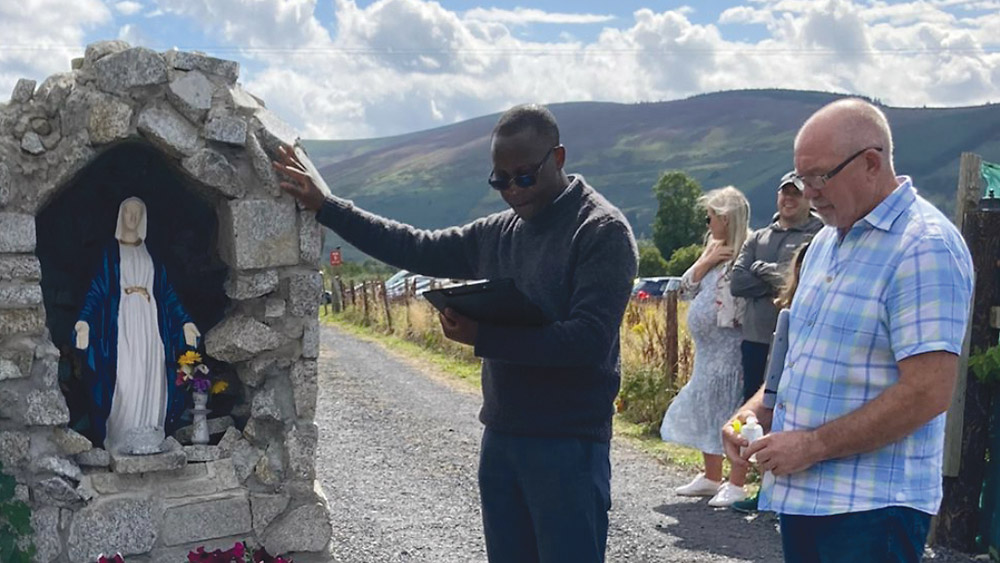 Mixing prayers, plots and pots with blessings and barbecues

ALMOST 100 people attended the annual Bohernabreena Allotments barbecue on Saturday, where a grotto was unveiled and blessed to mark 10 years since the first harvest in the allotments.

The allotments – not to be confused with the nearby Friarstown Allotments which are owned by South Dublin County Council – are owned by the Phibbs family.

There are 40 allotments in total, and allotment holders and their families attended the barbecue, where local priest Fr Hector Mwale blessed a grotto that had been rebuilt.

The rebuilding work was carried out by the owner of the Bohernabreena Allotments, Jimmy Phibbs, as his father Paddy Phibbs had built the grotto in his garden before he passed away in 2019.

However, Paddy Phibbs’ family home in Bohernabreena was recently sold and there were plans to get rid of the grotto, until Jimmy stepped in and decided to remove and rebuild the structure.

“I salvaged it and rebuilt it in the allotments, where it was blessed on Saturday,” Jimmy told The Echo.

“My father was part of the team that built that grotto at St Anne’s Church, but he built one at his house and that’s the one that I rebuilt.

“I felt very emotional about it, because the grotto is something my dad originally created, but we salvaged it and recreated it again. The grotto totally fits where it is now.”

Fr Mwale also blessed some of the allotments, at the request of plot holders, and two simultaneous barbecues were on the go on the day to keep the large number of attendees well fed.

Ten years on from when Jimmy founded the Bohernabreena Allotments with his father, the plots continue to be a success.

For Jimmy, the joy that comes from maintaining an allotment has never waned, even if his motivation for doing it may have changed.

“In the beginning, for me, it was about experiencing the growing of the crops,” he explained.

“But since then, I would say it’s the people and the community. I work in aviation in a high-pressure job, and I find that having an allotment grounds me.

“It’s not so much about the growing, it’s about the people. The allotments are very isolated, but the allotment holders self-manage it for me because I travel a lot.”

Over half of the allotment holders have been involved since Bohernabreena Allotments was founded a decade ago, and Jimmy said last weekend’s event was a fitting celebration of that milestone.

“I’ve never seen so many happy faces,” he said. “The feedback from people was great, it was a super day. It was good fun.”