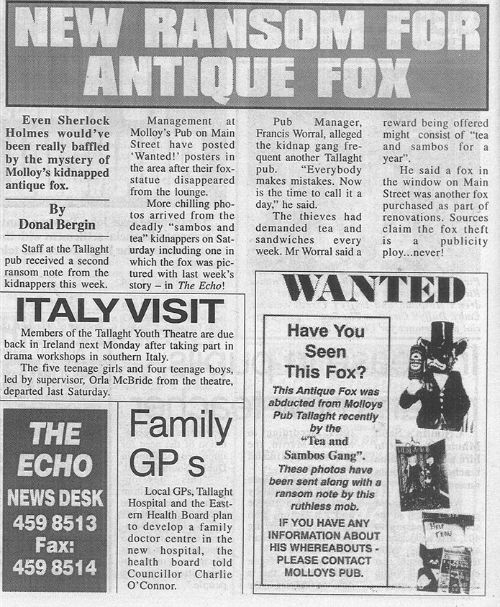 Molloy’s antique fox gets pride of place at funeral

MOLLOY’s antique fox let bygones be bygones this month when he attended the funeral of the alleged mastermind behind his kidnap and ransom demand in 1997.

Tallaght came to a standstill in the autumn of 1997 when the antique fox statue was stolen from the pub on Main Street by the ‘sambos and tea kidnappers’ and held at ransom for nearly five weeks – during which time the fox was photographed at various locations nationwide.

The crafty kidnappers also anonymously sent their ransom demands and photographs into The Echo, which tainted any leads back to the culprits.

After five-weeks on a fantastic adventure for Mr Fox, Molloy’s agreed on a ransom of £146.80 – which equated to a round of drinks for those in the pub.

Earlier this month, Killinarden resident, and the alleged mastermind behind the foxnapping, Martin Staines passed away at the age of 52 – and the Molloy’s fox was guest of honour at his funeral Mass in St Agnes’s Church in Crumlin.

Fran Worrall, pub manager, told The Echo: “Martin’s passing was very sad for everybody but to portray his character and sense of fun, it was decided to bring the fox to his funeral – after all they had a long history.

“Martin (pictured right with his family at his granddaughter’s christening) was a lovely character and full of fun, everybody liked him and he will be most definitely missed by all in Molloy’s.

“After Martin’s funeral, his family and friends came back to the pub and, due to the impact Martin had on everybody here, all of the staff in Molloy’s wanted to be part of his funeral so, they all came into work that day and helped to give Martin a great send-off.”

Speaking to The Echo, Martin’s daughter Laura said: “My dad was an absolute messer and I do remember when I was about 10 the fox being in my house – and my dad and his friend cutting out letters from newspapers for the ransom notes.

“My dad was an absolute gentleman, he was the life and soul of every day and he would have done anything for anyone.”

She added: “I had to speak the day of my dad’s funeral and I don’t think I could have done it without the fox.
“The fox was brought up to the altar and got laughs out of everyone. “I had to explain the story of the fox then and it really helped me to get through what I had to say.”

Martin’s wife Lorraine, sons Wesley and Jason, daughters Natasha and Laura and doting grandchildren Grace, Alfie and Kylie wished to thank the staff of Molloy’s for their recent support and also to all of their family, friends and neighbours who have rallied around them.