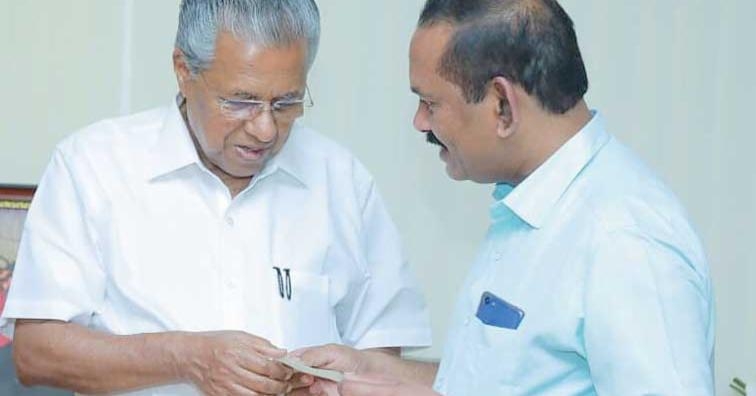 LIVING in Tallaght for the past 17 years, Baby Pereppadan recently travelled home to his native Kerala in India to play his part in rebuilding the city after it suffered devastating damage in a monsoon during the summer.

Baby was part of a Kerala fundraising initiative by the Malayam Association in Dublin, which, putting Kerala born people in touch with each other, reached out to its friends, colleagues and the wider community for support.

Baby Pereppdan presents a cheque of €4,800 to Chief Minister of Kerala, Pinarayi Vijayan

“As a result, we raised €4,800, much of which came from my own friends in Tallaght, I will be forever grateful to them for their kindness,” Baby said.

“This led to major flooding, horrendous landslides, closed airports, damaged and submerged infrastructure and a lack of basic necessities.

“Official reports have shown that more than 300 died, with thousands stranded and hundreds of thousands left homeless.

“Many inhabitants including pregnant women, the sick, the elderly were forced to stay in their terraces, due to extremely high levels of water, without food, drinking water or any kind of external help.”

Baby, who lives in Tallaght with his wife and two children, and is the area’s Fine Gael Local Representative, travelled to Kerala and presented the cheque to the Chief Minister of Kerala, Pinarayi Vijayan.

“It was a humbling experience to be able to return home, where many of my family still live, and to be able to do something small to assist them,” Baby said.

“I would like to extend my sincere thanks to my community here in Tallaght, their support was very heartening.”