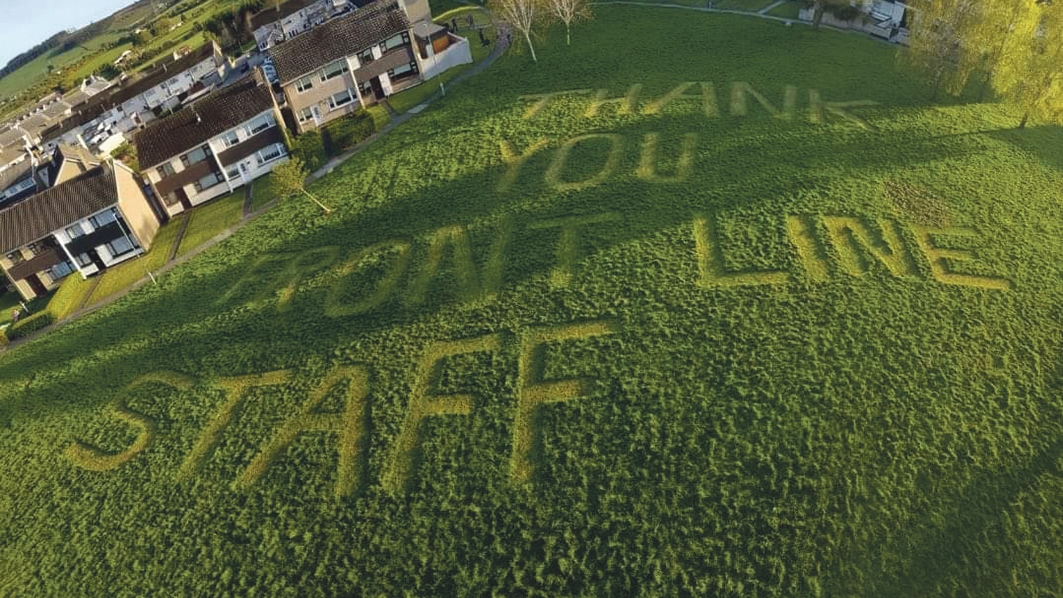 NEIGHBOURS in Rathcoole thanked frontline workers at a grassroots level, quite literally, when they etched a thank you message into the greenspace of their housing estate.

To show their support for frontline staff working around the clock during the coronavirus (Covid-19) pandemic, the residents of Forest Hills came together – abiding by social distancing rules – to mow their field.

Over the space of four hours the four neighbours, David McGuirk, Derek Gallagher, Gazza Byrne and Anthony Talbot, managed to write ‘Thank You Front Line Staff’ with their lawnmowers into the green.

“The idea was thought up by a neighbour of mine, David McGuirk,” Derek told The Echo.

“We wanted to show our appreciation to the frontline staff and the work they are doing, but with the restrictions in place we were obviously limited to what we could do.

“As a gesture we thought we would write thank you with lawnmowers into the grass.

“David just called me on Friday night and asked me if I would help him with it because he knew that I was into the lawnmowers and that.

“So we went out on the Saturday and stepped out the letters in 3-metre spaces and as they say the rest is in the writing.”

As luck would have it, Derek was the perfect man for the job as he has a hobby that sees him buy old lawnmowers and restore them back to their original state – so there was no shortage of machinery.

The plan was to get another resident to capture the footage in the estate with a drone but to their surprise, the Garda Air Support Unit caught wind of what they were doing and hovered nearby to capture the message from a greater height.

“People were walking by quizzing us because to them, it looked like we were just walking around in circles.

“The longer we kept at it, it started to take shape and after about four hours, just as we were finishing up, the Garda Air Support Unit came overhead and started hovering.

“So they were able to take a few photographs from a higher angle as well.

“Myself and the wife have been trying to cocoon as much as possible, but once the opportunity came to get out of the house for a few hours I jumped at the idea.

“It was good fun in the end, and I have to say, it’s a brilliant estate to be living in.”