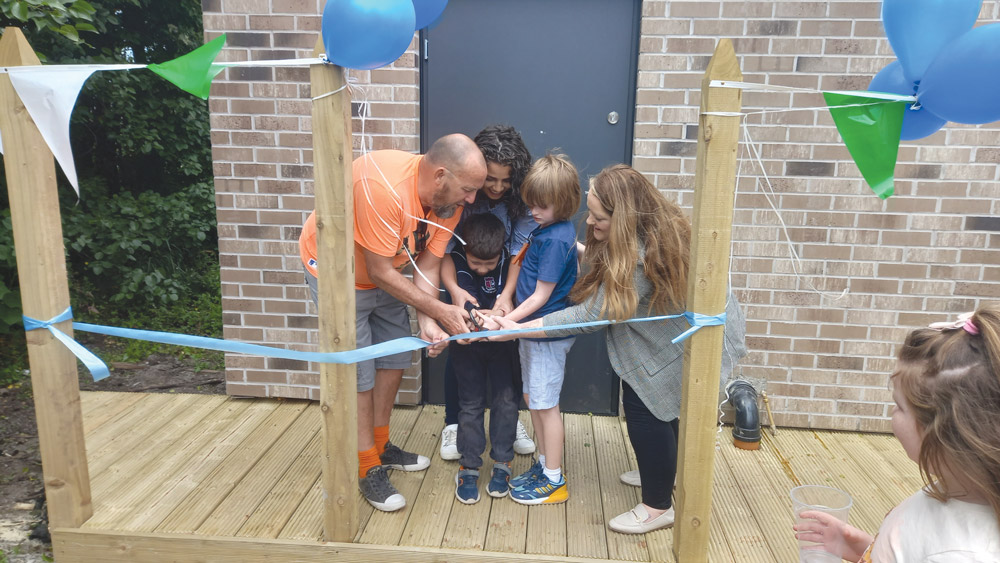 At the Bluebell ribbon cutting were Tommy Coombes , Nicola Scott and Paula Hickey, with Tom Scott and Daniel Hickey

THE opening of a new autism space will help to “take away some of the burden” for parents of children on the spectrum.

Bluebell Community Council and the People’s Foodbank hosted a double launch on June 10, for the Bungalow and Autism Unit on Bluebell Road.

There was a festival atmosphere – pre-thunder and rain – at the premises on Friday lunchtime, as stakeholders and residents gathered to attend the ceremony and enjoy free tea and sandwiches.

Tommy Coombes, Coordinator of Bluebell Community Council, said a lot of different people and organisations came together to make this happen.

“Dublin City Council facilitated the transportation of this unit from the UK to Bluebell and has gifted this community with a bungalow (leased to Bluebell Community Council) that will help meet the needs of the community as we progress the regeneration plan,” he said.

Speaking to the crowd at the launch, Mr Coombes said the land the autism space sits on was previously a “bombsite”, thanking all the stakeholders for their support and a special shout out to the volunteers, many of whom do a 40-hour week, when they only have to do 19 hours.

“Some of them were here until 9.30pm last night to get the place ready for today,” he said.

Debbie Smyth, from Tempohousing UK & Ireland, who donated the modular unit, is originally from Bluebell, and said she was “grateful to help the community – hopefully everyone can use it.”

Ms Harris, from the Harris Group, said she knew autism from personal experience and the importance of diagnosis and supports “inside and outside the family.”

The ribbon-cutting was performed by two young lads who will benefit from the unit – Tom Scott and Daniel Hickey.

Their mothers Nicola Scott and Paula Hickey were delighted to see the development.

The pair established a local parents’ autism group years ago in an effort to help parents cope.

“He will get so much use out of it – this is somewhere to bring kids that is safe,” said Paula, from Inchicore.

Prior to the opening of this unit, the only place to bring children on the spectrum was a flat in Bernard Curtis House.

Nicola said they work with a lot of families and setting up the parents’ group is ultimately where the idea for this space came from.

“It is something I was pushing for quite some time. You can’t bring your child to a busy place because you have to manage all that. This place takes away some of the burden, you are less alone.”

Cllr Daithí Doolan (SF) said: “Children with autism will enjoy this facility for many years into the future. I would encourage other communities to come see for themselves what has been achieved here.”