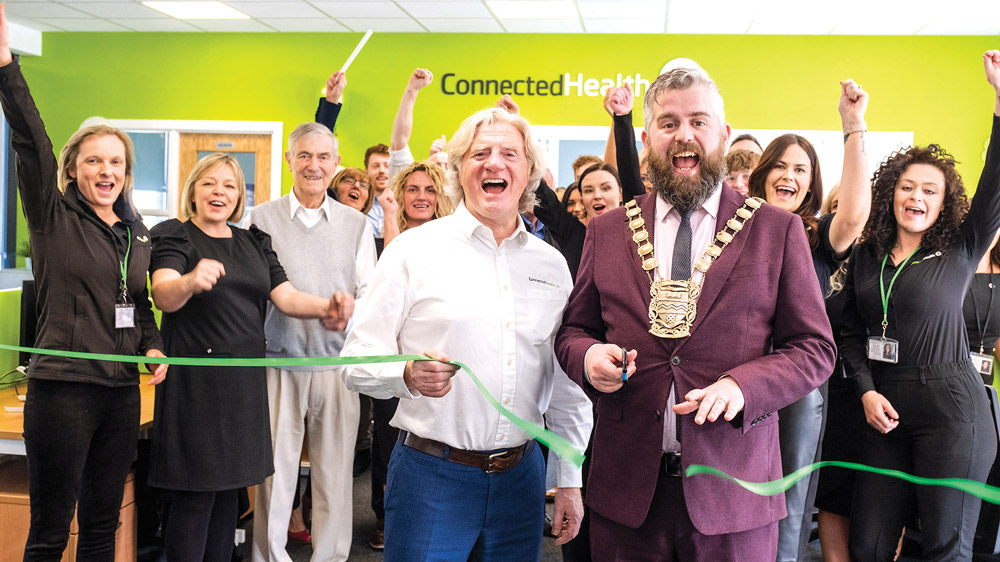 CONNECTED Health has unveiled plans for Europe’s first online homecare package which was announced at the official opening of its Ireland headquarters at Belgard Road in Tallaght earlier this month.

The new facility, located in the Lidl Neighbourhood Centre in Tallaght, will act as a training hub and is staffed by 14 new management and administration personnel, with the company stating that they plan on creating a further 500 jobs across Ireland.

The new ‘Homecare Configurator’, which was announced at the opening, is part of the company’s drive towards ‘Homecare 2.0’ in Ireland and will allow clients and their families to integrate towards high quality physical care with wearable technology, medication devices and virtual care service offerings in building a fully bespoke care experience online in a matter of minutes.

Users of the platform can simply build what they need into their own package by adding required services and products into a shopping basket and placing an order. Users can also select the number of hours of physical care they need, and the volume of virtual daily check-ins required, as well as add devices such as activity monitors, medication adherence monitors and incontinence detectors.

Minister for Rural and Community Development, and Minister for Social Protection, Heather Humphreys, welcomed the new platform and the opening of Connected Health’s new head office in Tallaght.

Minister Humphreys said: “I want to congratulate Connected Health on the opening of its very impressive purpose-built facility in Tallaght. I welcome its dynamic approach to the provision of homecare services and indeed the large number of jobs it is creating in many locations throughout the island. The cutting-edge approach to the provision of its services is impressive and I wish all of its management and staff every success in the future.”

Speaking about the new platform, Connected Health Director, Ryan Williams, said: “This approach is the first of its kind in the homecare market in Europe. It aligns perfectly with both Connected Health’s vision to deliver Homecare 2.0 and with government’s ‘Sláintecare’ reforms, as well as the ‘Stay Left, Shift Left’ strategy to utilise increased digital technology within the broader healthcare sector.

“This approach has been developed over a period of time with extensive input from stakeholders, as well as our technology partners including Amazon, Microsoft and Arrow Electronics. We are incredibly excited about the next few months as part of our Homecare 2.0 journey, which is focused on re-engineering, modernising and disrupting the entire homecare sector.”

NEWER POSTDrugs worth €74,350 and €125,000 in cash seized by gardai
OLDER POSTInflation and supply chain are leading to project delays