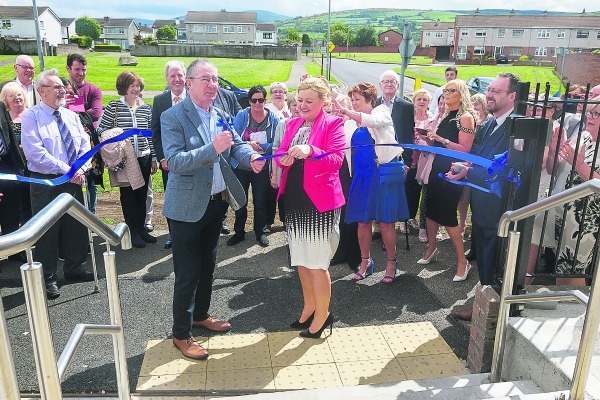 THE Tallaght West Credit Union has officially opened its new premises in Springfield, which double the footprint of the original building will provide more space, comfort and privacy to its 16,000 members.

Celebrating its 35th birthday this year, the Tallaght West CU is one of the largest credit unions in Dublin, with the community-led co-operative serving a catchment area that is home to more than 50,000 people stretching from the Whitestown Road at Tallaght Stadium to Citywest.

Set up by the community for the community, the Tallaght West CU believes that its new building reflects the future growth of the area it serves and the “uplift” in the community since the recession.

Daren O’ Neill, Operations and Development Manager of Tallaght West CU, told The Echo: “We have rebuilt the premises completely and it’s now more spacious, bright and comfortable… and is twice the size of the old building.

“Our membership has never fallen off, we cater to an area of more than 50,000 people.

“However, what we have noticed is more people joining and an improvement in both savings and lending for our members.

“We believe this is a result of more people back working.

“The recession hit us really bad and communities in West Tallaght really suffered during this time.

“However, we have noticed that things are improving and the ability of our members to borrow has gone up significantly.

“On a whole the area is doing better, and there is an uplift in communities.”

Employing 13 people, the majority of whom live in the local area, the credit union is steered by a voluntary board, with a number of volunteers also helping out at the desk and in the back office.

Mr O’ Neill said: “The community has built this credit union into what it is, and it is a stand-a-lone credit union that is owned by its members.

“We have staff that are here 20 years and Michael Geaney, one of the founding members, officially opened the new building [last Saturday].”

He added: “We are the only financial institution in West Tallaght and are providing a service that no one else is.

“While we currently don’t have the same services on offer as a retail bank, we are moving towards providing a full range of services.

“As the credit union is a not-for-profit, when this happens we can give our customers a better deal.”

Last Saturday, past staff and volunteers, members of the community and local politicians, gathered to officially open the new building and celebrate the past, present and future of the Tallaght West Credit Union.

For further information drop into the credit union, which is located in the Fortunestown Shopping Centre, Springfield, call 4510811 or visit www.twcu.ie.

Turn to page 64 for pictures from the event.