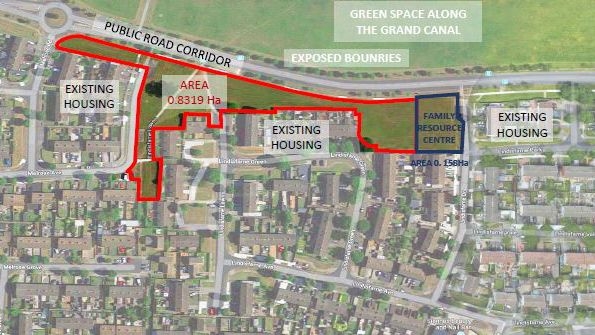 PLANS for an infill social housing development include a proposal to provide land for a family centre, which was forced to close last year following an attempted robbery.

The Lindisfarne development will see the build of 31 new social houses in the Lindisfarne/Melrose area of Clondalkin.

A separate part of the plan by South Dublin County Council, is to dispose of an adjoining site to Deansrath Family Resource Centre – which is subject to planning approval and funding availability.

The centre had to close last November after a stolen truck smashed through the front door of their building during a botched robbery.

Structural damage to the building was so severe, that the HSE engineering department declared it unsafe.

The centre provides support services for more than 150 families and are relying on neighbouring community groups to help them out.

Structural damage to the building

They are currently keeping services going as best they can despite Covid-19.

Previous plans for a new family centre failed to materialse, but the latest proposal is deemed to be the most viable yet, according to a Deansrath source.

According to a report by the council, the site will provide a “multipurpose building to provide an innovative community based family centre – ticking every single box in the realm of early intervention.”

The report cites the “utmost importance” of road frontage to the site, which will “hugely encourage footfall” to an “accessible hub of family support provision”.

Cllr Eoin Ó Broin (Ind) said: “The designing architect from the council, Patrick de Roe, has assured me that the houses are not being built on parkland but on unused land that has no passive surveillance.

“As such I am happy that this is a good infill housing proposal. I look forward to the input of local residents as well. The adjoining plans for the Deansrath Family Resource Centre look very imaginative.”

Plans for the new building include five consultation rooms, early years facility to cater for 40 children aged 0-5 at a session, a catering kitchen, space available after hours for community use and a reception and waiting area.