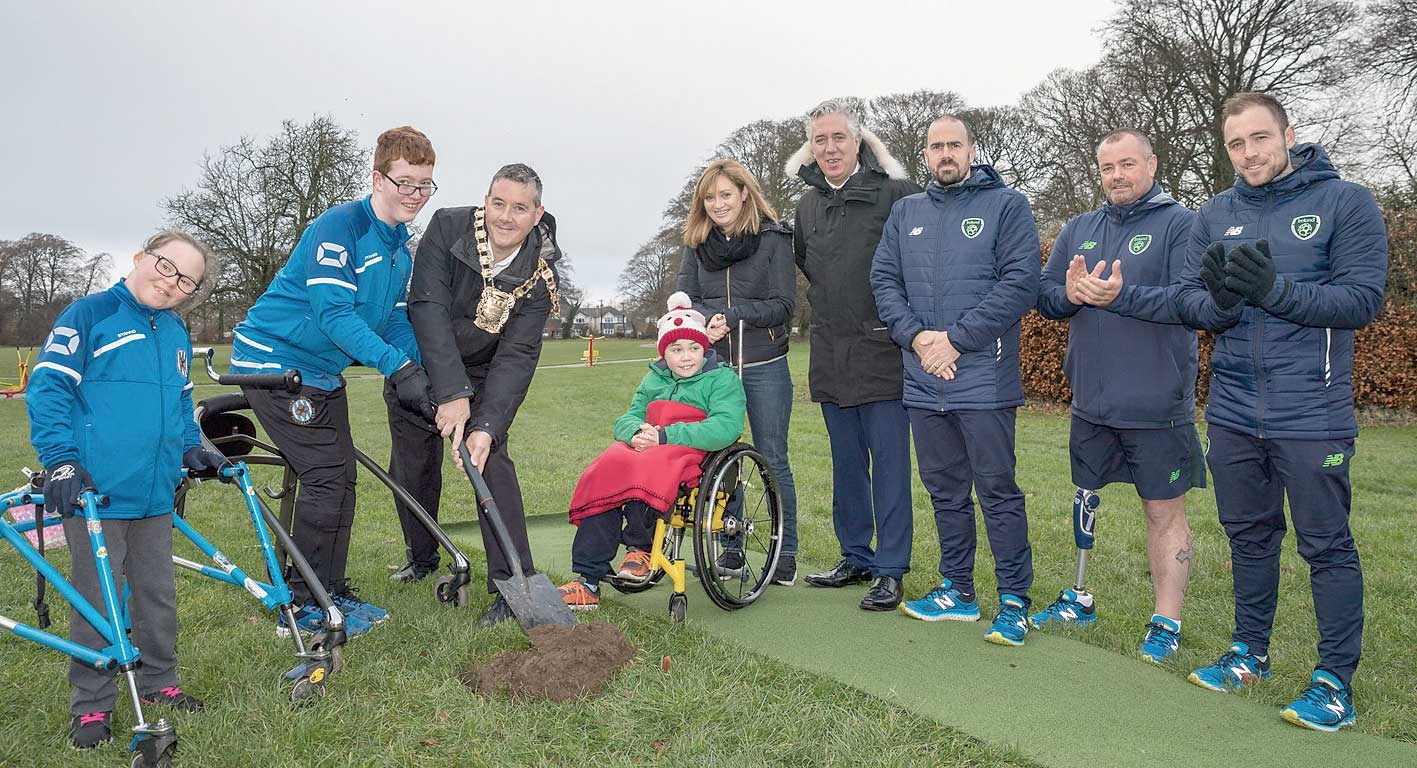 THE new Frame Football pitch was opened in Hermitage Park in Lucan on Monday. The Mayor of South Dublin, Paul Gogarty, ‘turned the sod’ on the pitch.

He was joined by Daniel McLoughlin, Chief Executive of SDCC, John Delaney, Chief Executive Officer of the Football Association of Ireland (FAI), and guests, to celebrate this wonderful addition to the wealth of inclusive sport and leisure amenities in South Dublin County.

The FAI with its Football for All programme is dedicated to providing football to players who require the use of a walker-style frame and also to those who feel that they can compete more equally by using these frames.

The game is played using the frame as an aid with the basic rules of Football which are the same 4v4 or 5v5 games.

Mayor Gogarty told The Echo: “I am delighted to be able to formally launch the Frame Football pitch construction project today.

“Since Esker Celtic launched a team in 2016 the squad has gone from strength to strength with the assistance of trainers from the FAI.

“This new all-weather facility will copper-fasten the Esker Celtic Frame Football team and encourage new players to get involved. Accessibility in sport is a hugely important issue and it is great to see the club, the FAI, the Sports Partnership and the Council all committed to the ethos of inclusion within the football community. I hope the construction work goes to schedule and look forward to the opening of the facility in the coming months.”

John Delaney said it was “a hugely significant development for Football for All and Frame Football”.

He added: “I would like to thank Mayor Cllr Paul Gogarty, South Dublin County Council and the Sports Partnership, and of course Colm Young and everyone at Esker Celtic Football Club, for their continued support and huge inputs in this development.”

The event was part of South Dublin County Council’s planned events for National Accessibility Week 2017 which ran from Monday, November 27. The week-long campaign coincided with International Day of Disabled Persons which occurs each year on December 3.

NEWER POSTJason Lester: “It took a lot from my life and my family’s lives”.
OLDER POSTCalls for Minister to reverse cuts to childhood scheme