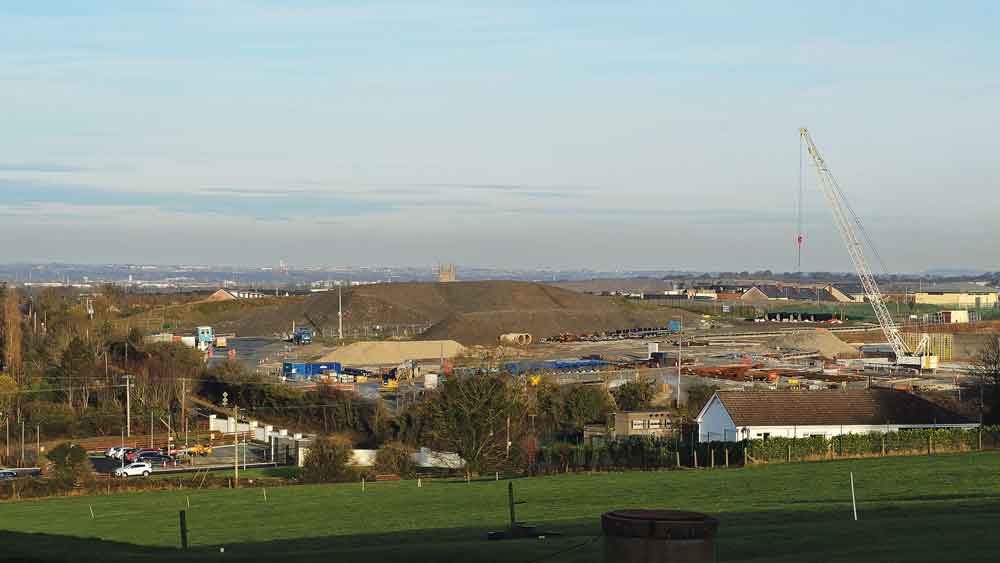 The new reservoir in Saggart under construction

Reservoir will have capacity to store 100m litres of water

THE construction of a new state-of-the-art reservoir in Saggart, with a water storage capacity equivalent to 40 Olympic-sized swimming pools, continues to progress, according to Irish Water.

The Irish Water project, which is being carried out in partnership with South Dublin County Council and Dublin City Council, involves the construction of a new, covered, treated storage reservoir and associated pipelines.

The reservoir will have the capacity to store 100 million litres of treated drinking water supplied from the Ballymore Eustace Water Treatment Plant.

The project will also include a new electro chlorination plant and associated infrastructure as well as the construction of approximately 680 metres of the new Slade Valley Trail, which will run along the boundary of Irish Water’s site.

The construction of the new reservoir began in March, and the works mark the first significant investment in the existing Saggart waterworks since it was built in the 1950s.

The current waterworks will be replaced with the new reservoir. At present, the construction of the main reservoir structure and inlet valve house is already underway.

Works to divert the existing supply pipeline have been completed and existing reservoir structures have been removed.

Speaking about the project, Stephen Seymour, portfolio delivery manager with Irish Water, said: “The delivery of this significant project will improve security and resilience of supply to the Greater Dublin Area (GDA), as well as supporting future growth and development.

“It is one of a number of water projects in the GDA that will provide the infrastructure needed to support the building of houses and schools, to attract new industry and to allow companies to expand and grow.

“The size and scale of the task to improve water services for a modern, growing economy shouldn’t be underestimated.

“We have made significant progress, but there is work still to do as we continue to build world-class water infrastructure through our multi-billion programme of investment.

“The new reservoir will have the capacity to store enough water to supply almost 300,000 homes with the water they need for one day.

“It is one of a portfolio of water projects that we are delivering to safeguard the water supply to homes and businesses.”

The construction of the new reservoir is expected to be completed within three years.