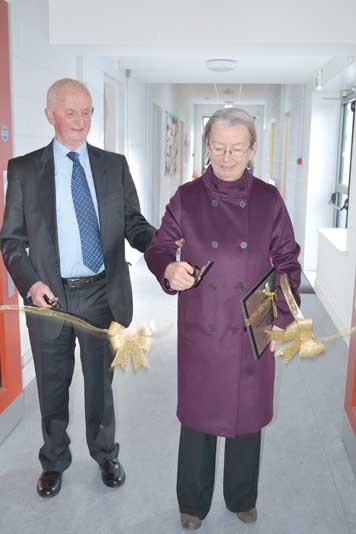 Ms Clarke had the honour of cutting the ribbon on the extension, which has been named The Clarke Wing, following Bishop Eamonn Walsh’s blessing of the building at the opening ceremony.

Speaking to The Echo, Ms Clarke said: “It was very touching, I feel very thankful and grateful to the school community.

“It’s an honour, and it makes me feel that I’m still a part of the school community.

The extension will provide the school, which has 209 students and 19 teachers, with one new mainstream classroom and four special education rooms.

Principal Michele Hamilton told The Echo: “The kids are really going to benefit from the new extension.

“The ceilings are higher, the classrooms are brighter, and we now have four resource rooms so teachers will have more room for students who need extra help.”

Ms Hamilton added: “The school’s Board of Management decided to name the building after Ms Clarke in appreciation and recognition of her hard work and dedication.”

The school first opened its doors in 1977 at a time when the Tallaght area was undergoing rapid development, and the school’s student numbers have continued to grow, which is what prompted the construction of the extension.

Looking to the future of the school, Ms Hamilton said: “This new building symbolises a renewed energy for the school, and we want to maintain that energy.”