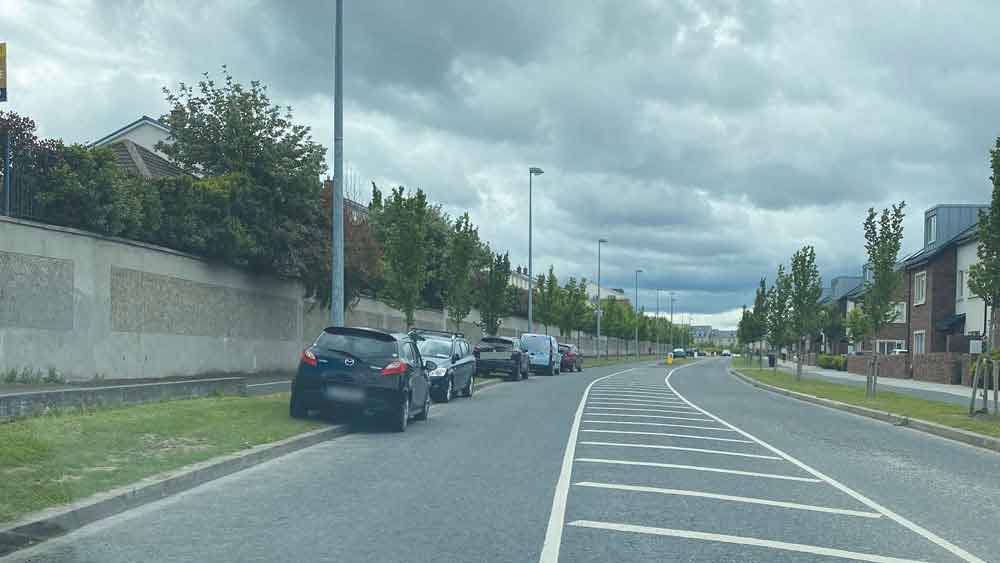 Residents have had to park along the road in Citywest

‘Nightmare around traffic and parking’ at Citywest Quarter

ISSUES with parking around the Citywest Quarter development is causing a “nightmare around traffic and parking”, according to a councillor.

Citywest Quarter is a 421-apartment development by Cairn Homes at Cooldown Commons and Fortunestown, adjacent to the Luas stop.

“It’s become an issue in the last couple of months, as more people have moved into Citywest Quarter,” Cllr Dunne told The Echo.

“It’s becoming an issue and it’s one we foresaw when we made observations on the planning application.

“There’s one parking space to every four apartments, so we knew there’d be a nightmare around traffic and parking.”

Cllr Dunne said the development’s close proximity to the Luas line may have played a part in the number of car parking spaces not having to match the number of apartments as it’s on an accessible public transport route.

However, she added that travelling to work using the Luas isn’t necessarily an option for everyone, and this is evidenced by the spiralling parking issues.

“There’s a load of illegal parking on the road,” she explained.

“It’s crazy, what’s happening up there.”

A related issue was also raised by Solidarity councillor Leah Whelan at last month’s meeting of the Tallaght Area Committee, where she described the issue with clamping at Citywest Quarter.

In the motion she tabled at the meeting, Cllr Whelan stated that there was an issue with “clamping at Citywest Quarter where residents are being routinely clamped because of lack of car park spaces.

“I have been contacted by a resident who has been clamped several times in the past couple weeks (€125 removal fee, €50 added on for any additional days).

“Residents have been told underground car park is full, and they will be put on a list without any timeframe of when or how the issue will be resolved.

“This includes HAP tenants, and people who are already being squeezed by cost-of-living crisis – additional fees like such are causing an impact.

“Can the manager report on the number of car parking spaces in the planning permission and any related issues?”

In response, South Dublin County Council stated it has “no remit” in the clamping of cars in private developments.

In relation to the planning permission query, the local authority stated: “Parking spaces are conditioned in planning decisions in line with objectives outlined in the relevant County Development Plan.”

At the next Tallaght Area Committee meeting, Cllr Dunne said she will raise the parking issue with the council, with the hope that a solution can be found.

“I don’t want to put any of the residents out,” she explained.

“My job is to support them, and to try to find a solution that will be good for everybody so there’s some on-street parking that won’t affect the aesthetics of the area and isn’t a health and safety risk.

“I do have full faith in the council’s planners, that if there is a solution, they’ll find it.”

A spokesperson for Urbeo, the landlord that owns 282 of the apartments in Citywest Quarter, told The Echo: “All parking spaces owned by Urbeo within Citywest Quarter are allocated to residents using a permit system.

“This is normal practice in managed apartment developments.

“The roadways and verges surrounding the development are not in the ownership or control of Urbeo.

“We are aware that there have been incidents of illegal parking surrounding the development and that cars have been clamped as a result.

“Any further parking plans for the area would be a matter for the council as we have no authority over the public roads and verges.”