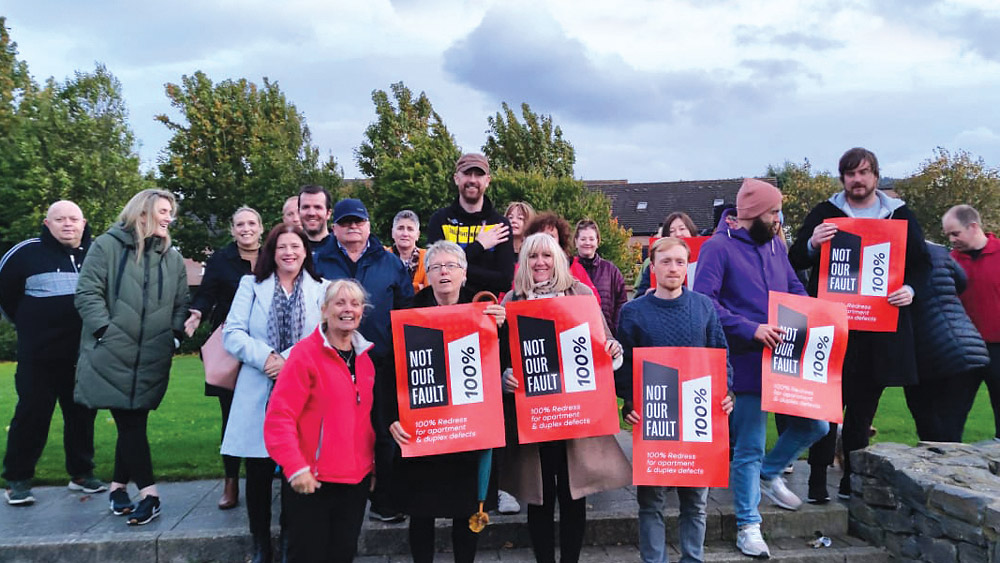 ‘Not Our Fault’ pushes for 100 per cent redress

FACING desperate pressures to pay for defects they knew nothing about when buying properties – a number of Celtic Tiger era developments have joined forces to strengthen their campaign for a 100 per cent redress scheme.

The Not Our Fault campaign hosted a press conference on Monday at Buswells in the city centre.

Leading members of the campaign are apartment and duplex owners in Park West and Hunterswood, Ballycullen, who formed a bond upon discovering they were in the same boat.

They urge other affected complexes built between 1991 and 2013 to attend a public conference on November 19, from 1-4pm in the Plaza Hotel, Tallaght, and share their concerns.

The Echo previously covered the plight of residents in the Crescent Building, Park West, which is comprised of nine blocks and 232 apartments.

Property owners in the complex are facing a €68,000 bill to fix a problem not of their doing, and a demand of a €15,000 first instalment by the end of this year from management company Keenan Property Management (KPM).

Crescent Building was built in 2003 by a third-party contractor as part of the larger Park West campus developed by Harcourt Developments.

Hunterswood residents face a similar problem with KPM demanding bills in the region of €65,000 for fire safety defects.

The builders responsible for both developments are still in business, but trading under a different name – a situation similar to potentially 100,000 homes across the country, according to a report commissioned by Housing Minister Darragh O’Brien.

Park West residents told The Echo a company in England who specialise in fire protection products, have subsequently contacted them to say they “may be able to solve about 70 per cent of our problems at a much-reduced cost.”

“They are coming to the conference to put on a visual demonstration and answer any questions that people may have,” said a Park West resident.

Campaigners say the fault lies with political parties who enshrined a system of ‘self-certification’ for builders who cut corners to maximise profits.

With the government due to make a decision on what scheme to introduce by the end of the year, residents know time is not on their side.