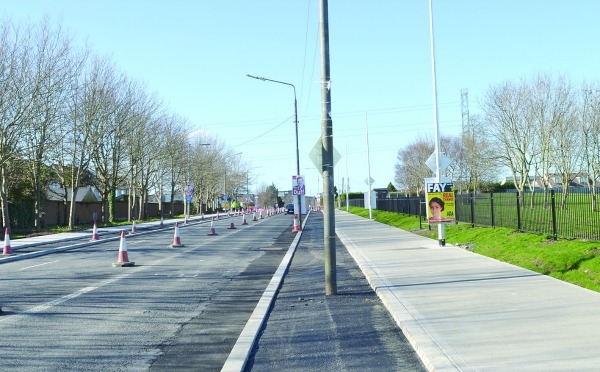 Not so much a new cycle lane – more an obstacle course!

The ongoing works in Tallaght Village is part of a 3km stretch of cycle corridor between Tallaght and Templeogue, which started in Tallaght village last March and, one year later, construction crews have moved the short distance from Main Street to Main Road.

In the past The Echo has spoken with residents, businesses, motorists and pedestrians, who all voiced their frustration over the works, which they claim have impacted negatively on their lives.

This week, it’s the turn of the cyclists as they criticise the cycle corridor – which they claim is more of an obstacle course than a cycle track.

Heavy machinery, pot holes, traffic cones and loose gravel are just some of the obstacles cyclists have to watch out for – including the odd public-lighting pole.

“The new infrastructure through this area of the works will be ready in mid-March, pending ESB connection.”

The council confirmed that works are expected to finish in July.