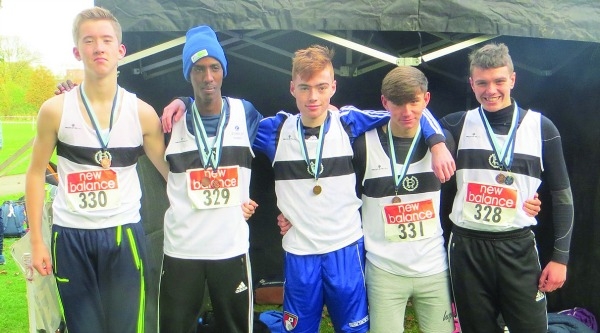 O’Loughlin powers his way to gold in county championship

LOUIS O’Loughlin stamp-ed his class all over the Boys Under-17 5km race at the Dublin Uneven Age Juvenile Cross-Country Championship in Santry Demesne on Sunday.

It was a gun-to-tape victory for the Donore Harriers runner, yet he was still made work for it.

James Maguire, of Dublin South Dublin AC, remained close over the first two laps, before the Moyle Park College student broke clear on the third and final circuit to win with about 60 metres to spare.

The achievement was all the more remarkable given that O’Loughlin was stepping-up in age group, having won the Under 16s Dublin title three weeks ago.

His clubmate Fathi Aden, who was also stepping-up in age group, placed fourth after a promising start.

With Sekeriye Ahmed having to bow out through injury and with James Murphy unable to complete the race due to illness, it was left to Liam Brophy in 22nd place and Jack Raftery (stepping-up) in 25th to close the team score.

There was a third place finish for Donore in the Girls Under-17s team competition over 4km.

The non-scoring team members were – Lauryn Dunne in 27th, Kate Lynch in 28th, and debutante Abby Byrne in 29th.

Barney Kelly, in only his second race with the club, was desperately unlucky not to come away with an individual medal in the Under-15s Boys race over 3.5 kilometres.

He was in the leading group of four athletes throughout the first half of the contest.

However, as the first two broke clear he was left to close a 10-metre gap that separated him from the third-place DSD athlete.

Putting in a sprint finish towards the tape Kelly was left an agonizing one-metre short of that bronze medal while Alan Reid finished 32nd in the same race.

Eliza Ní Tighearnaigh took eighth in the Under 19s Girls contest over 4km, while Sam Gallagher and Michael Gibbs finished 23rd and 33rd respectively in the Junior Men’s event held over 6km.

In younger age groups the best performance came from Matei Ursachi, who was stepping up in age group and finished 10th in the Boys Under 11s over 1.5km, while Lynch sisters Amber and Honor, in the Girls Under 9 and Under 11 races respectively, both placed 19th position.